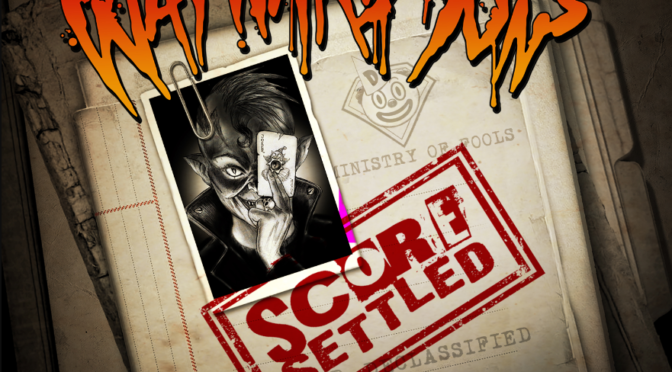 UK rockers Wayward Sons have announced the release of a special new EP, Score Settled. The EP follows the release of their latest studio album, Even Up The Score which came out in October 2021. The EP features three new, unreleased songs that were recorded during the sessions for Even Up The Score as well as three tracks that were previously only released on a physical format, and a live studio version of a track previously released as a studio bonus track in Japan.

Fronted by vocalist/guitarist Toby Jepson – who came to prominence as the front man of Little Angels in the 1980s & 90s in the UK, and joined by Nic Wastell (bass – Chrome Molly), Phil Martini (drums – The Union / Joe Elliott / Quireboys / Spear of Destiny), and Sam Wood (guitar – Treason Kings), Wayward Sons deal in energetic rock ‘n roll coupled with thoughtful, insightful lyrics. Passionate, honest music made by passionate honest musicians who have come together to create rock music that reflects their heroes from the ‘70s and ‘80s, while also touching on the present.  Dave Kemp may also be involved – as long-term songwriting partner, keyboard player and part of the “Big Bad Horns” that were such a part of the Little Angels sound.

Toby had been busy in the background working with a host of UK bands and in the movie scene, and producing the likes of Saxon, Fastway and Toseland, before pulling together a new band in 2018, and starting pretty much from scratch again – and now up to three albums released, and very busy touring the UK at present.

The three new tracks start with Beaten To The Punch, which is an absolute belter of a rock song, reminding me of what a great voice Toby always had – much in the mould of classic British rock singers – and the song has a cracking chorus, a pumping middle-eight with some great harmonies, a stripped-back section before the band piles back in with a couple more choruses and a return to that middle-eight which then fades out into a mix of the vocals over an ethereal piano melody that was quite unexpected.

Little Angels were always a bit different, with piano and a horn section given prominence – and this always helped them stand out from the mediocre!  Can’t Take It Anymore is a rip-roaring up-tempo pop-rock song, and sees some great drumming from Phil Martini throughout, and a superb guitar solo from Sam Wood, with some Thin Lizzy-like harmonies in sync with Toby, and these continue over the final chorus.

The third new track Real Go-Getta is the closest to a Little Angels sound of the three, and has a very cool soul-pop vibe to the verse before the chorus which is another with a great hook.  The guitar solo offers an almost slide-guitar sound, and the sound is bolstered (I think) by some layers of keys behind the band which really builds up the overall sound.  Standby Heart has a rough punky edge to it, without losing the melody, and Toby’s voice is strong, and shows off a higher range than normal.   I love the extra energy of Radio Denial with the urgent riffs, high-energy drums, and the snarled vocals.  The chorus features some great backing vocals, and both these two tracks present a raunchier side to the band, both coming in under 3 mins.

The punky tone continues with Totally Screwed with an effective double-tracked vocal line, and a lightning guitar solo that shows Sam to be a really slick player.  The final outtake, Backslide, comes from the Japanese version of the debut album, Ghosts Of Yet To Come, and shows the band in their earlier incarnation, with a driving beat, raucous riffs and rougher vocals that contrasts with the newer material.

Wayward Sons are a band with their roots very much in the classic British rock mould, and Toby’s voice taking centre stage with his powerful delivery, without reducing the impact of a super-tight and solid band around him – there is hint of the likes of Bad Company and Thin Lizzy, but with an extra dimension such as from Thunder, The Wildhearts or The Almighty that sticks them up alongside the current crop of bands like Massive Wagons or Gorilla Riot to name just a couple.