For the past decade DATAROCK have melded indie dance, new wave, pop, and funk into a custom sound responsible for a steady stream of unforgettable tracks and performances.

They’ve done everything from tearing the roof off Coachella to playing Yo Gabba Gabba and now DATAROCK will release “Catcher in the Rye”, the most extravagant single in history in March 2011!

The single will come as a designer toy with a USB stick that features 110 tracks, 1500 photos taken at their shows in 33 countries, 20 music videos, and Never Say Die a brand new hour-long concert film. The single will also be released as a digital 5 track EP. The USB features the EP, the new album Music For Synchronization, both of their previous albums with bonus tracks, the new Lost and Found b-sides and rarities compilation, 15 new instrumentals, and the 40 track remix album Mixed Up.

Go behind the scenes & into the studio – the making of CALIFORNIA 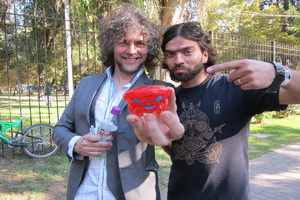