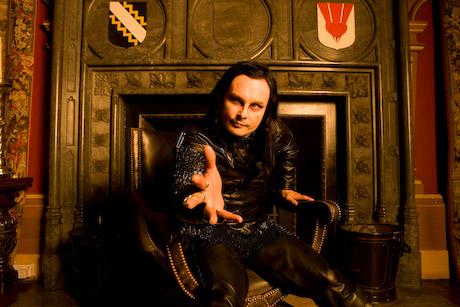 Awaken from thy nightmarish faerytale and prepare for the violation of thy soul as the Lords of all the metal-goth-vampire disciples, the inimitable Cradle of Filth, descend upon Australian soil in 2009. Just Say Rock Productions, in bloodied unison with Roadrunner Records Australia, proudly presents the Australian leg of Cradle of Filth’s, Godspeed on the Devil’s Thunder tour in May 2009.

Conspicuously missing from our shores since 2000’s Midian tour, the highly successful extreme metal innovators from Suffolk, England will deliver their full theatrical rock show to Australian audiences who have been kept waiting in the depths of murky darkness for ‘ages’.

Formed in 1991, Cradle of Filth rose to the top – and transcended beyond – their genre, to a class of their own, via groundbreaking albums and promo clips, and a film, Cradle of Fear. 1996’s epic Dusk and Her Embrace marked their initiation of concept albums, while 1998’s Cruelty and the Beast fully realised the idea. The album bathed in a richness of sound and narratives based on the life of Elizabeth Bathory, the Blood Countess.

And of course, controversy was always trailing not too far behind their black coat-tails. The now infamous and highly sought after “Jesus is a C**t” t-shirt had fans worldwide (even hitting home, in Brisbane) fined and arrested for wearing it in public, and has been banned in New Zealand. Meanwhile, the band’s appearance at the Vatican, wearing “I Love Satan” shirts, didn’t go down well with the holy city’s fraternity.

In October 2008, Cradle of Filth unleashed their 8th album, Godspeed on the Devil’s Thunder (through Roadrunner). The album is a dark, chilling account of the hellish life of Gilles De Rais, a 15th century French nobleman turned murderer and Satanist. It is presented with the grandiose atmospheric sound, Dani’s Filth’s unmistakably versatile vocals and passion and sharpness that defined their most classic albums.

Cradle of Filth’s lavish musical arrangements and uncompromising persona are equally matched by a thrilling and dramatic live show. This is one date with the devil that you don’t want to miss. You’ll be damned if you do…and if you don’t.