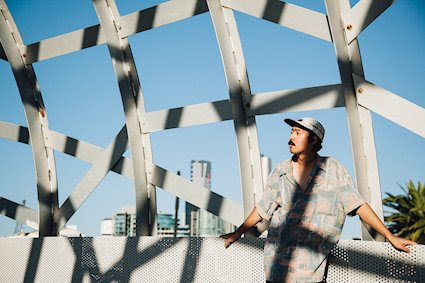 Changelings is the musical solo project of 25 year old Melbourne musician Jay Penaflor. Moondance Venus is the lead single from new sophomore album From My Raygun With Love.

The release is a follow-up to the project’s debut album Poppyfields, self-released in December 2016 and recorded at SAE Institute Melbourne with the help of close friends. The debut album introduced listeners to Changelings’s dreamy, melodic pop sound through it’s sporadic employment of chimey guitars, lush synth soundscapes and rich reverb effects. Changelings is about expressing a desire to always change, always evolve and always progress.

From My Raygun With Love signals a swift departure from Poppyfields initial dream-pop aesthetic. Almost immediately after the release of the first album, Penaflor sought to record a follow-up release with the intention of expanding into other musical avenues.

Whilst rom My Raygun With Love still maintains Changelings’ pop sensibilities first heard on Poppyfields, it also suggest a more intricate and sinuous side to Penaflor’s songwriting. Gathering influences from artists such as Mac Demarco, Unknown Mortal Orchestra and Beach house, the sophomore release delves into a more mellow and hazy pop sound.

Whether it’s the the cosmic melodies of album single Moondance Venus or the astronomical instrumentation on opening track Love Like Diamonds, the new record will no doubt take it’s listener on a surrealistic musical journey. Throughout it’s duration, the eight-track release will appear to meander and shape-shift it’s form; the occasional use of electronic-beat arrangements further adding to the album’s warped and illusory feel. The washy reverb effects and quirky guitar solos that featured on Poppyfields have now been replaced in favour of more unifying and symphonic textures.

Echoes of early Lennon/McCartney songs can be heard across the album due to the lyrics revolving around the topic of love and relationships. This was very much Jay’s intention – to write a second album that primarily focused on these specific subjects. Listeners will find the record greatly examining the familiar nuances that come with falling in love, being in a relationship and ending one.

The ‘From My Raygun With Love’ album by Changelings is out now.