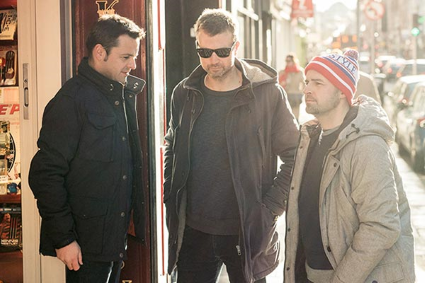 After an impressive nation-wide tour in 2014, Irish rockers Bell X1 return to Australia for 3 special shows this December in support of their impressive new album “Arms”.

Known for their wide range of styles, powerful live performances, intelligent and witty lyrics and a dedication to touring. NPR Music says Bell X1 deliver “a brilliant co-mingling of electronic music and anthemic pop rock”. The group are festival and arena headliners in their native Ireland and play to ever growing numbers on their regular North American and European tours. Aside from U2, they are the Irish band with the most airplay in their native country and, according to Billboard, also the second biggest live performers.

Four of their albums have been nominated for the Choice Music Prize for Irish Album of the Year and three of them debuted at #1 on the Irish Album Charts. 2015 saw them keeping busy on a fully sold out acoustic tour and supporting Ed Sheeran at Croke Park.

Fast-forward to Summer 2016 and “Arms” is a Bell X1 album in name and breeding, but which sounds like nothing else in their canon. The depth and width, the colours and shades, are familiar, but there’s a new space and sense to the songs which speaks volumes about what the band have achieved. The songs here possess a shabby grace and soft-focus elegance, but there’s also a bruised, bittersweet, romantic mood throughout. It’s what a band should be doing on their seventh album.

This tour will see Bell X1 exhibit new material alongside their much-loved previous singles & hits. Lock down your tickets immediately to avoid disappointment.

Tickets on sale 9am Tuesday 2nd August via www.troubadour-music.com