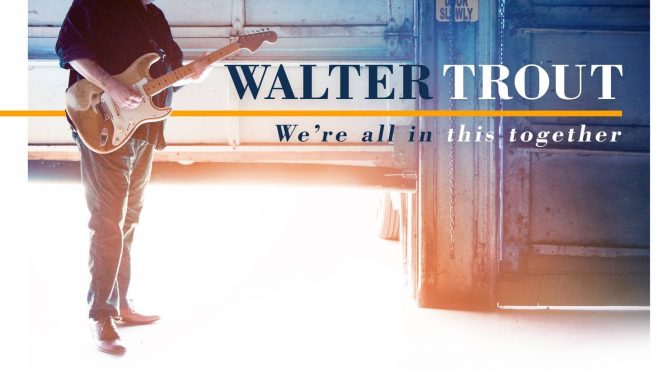 One of the old guard of the US Blues battalion, equally respected by the likes of John Lee Hooker, Canned Heat and John Mayall with whom he earned his stripes in the 1970s and 1980s, and the young upstarts of the industry, such as Kenny Wayne Shepherd, Joe Bonamassa and Eric Gales, Walter Trout has basically gathered together a who’s who of the modern blues family to perform with him and his band in a joyous project that really delivers a fantastic collection of original tracks written by Trout specifically for the guitarist joining him for the track (with a little help from his wife in channelling the different blues styles to the right guest!).

According to Trout, “It was easy to get them to agree. The hard part was the logistics of scheduling, because every one of these guys is a touring, hard-working musician. It actually went three months over schedule, because there were certain guys that wanted to be on there, but couldn’t get into a studio for a month. My wife was really the one that had to put all that together. She had to arrange times, engineers, and set all that up. Logistically, it was somewhat of a nightmare, but everybody came through.”

From the kicking opening bars of Gonna Hurt Like Hell, (Kenny Wayne Shepherd) to the sunset blues and epic solos of the 8 minute title-track and closer We’re All In This Together (Joe Bonamassa) it is obvious that the description of Trout as being part of the glue that bonds the blues community together is an apt one! I have no idea who payed which solo on which part of each song, but that is not the point. The record is not really about Trout or any of the guests, it is about celebrating the genre, spanning pretty much his 66 years as a form of music, and it delivers on every single track.

So the performers include a pretty full back-story from the Trout career, with “Memphis Charlie” Musselwhite (allegedly the inspiration behind Dan Akroyd’s Blues Brother) guesting on The Other Side of the Pillow, being a friend from the old Canned Heat days, and John Mayall, with whom Trout played in The Bluesbreakers for 8 years adding some soul to the stripped back delta blues of Blues For Jimmy T (Jimmy Trapp – Trout’s old departed bass player) – making a change from the electric blues they have been more familiar with.

There is a southern rock feel to She Listens to The Blackbird Sing (Mike Zito) which sees him taking the lead vocal role and delivering something akin to The Allman Brothers or The Outlaws – not a million miles from Zito’s main project The Royal Southern Brotherhood featuring Devon Allman and Cyril Neville to name-drop some more blues rock royalty!

Robben Ford joins in for a straightforward blues instrumental in Mr Davis which just gets more and more outstanding as the song develops and sees the two guitarists trading licks and sharing the solo lines like they’ve been playing together for years. We then dive straight into the wailing howling blues of The Sky Is Cryin featuring Warren Haynes from The Allman Brother and Gov’t Mule which is just timeless in the feel from the Hammond Organ behind the guitars, and the husky vocal line. It’s hard not to love these 7 ½ minute blues jams, but they never feel like dragging – the quality of the guitar playing, and the variety of styles means that every track has its own life in the project.

One of my current favourite players is Eric Gales, and he delivers a funked-up blues riff in Somebody Going Down which matches his throaty blues growl perfectly, and includes a searing solo from Gales as well as from Trout himself, and they both let rip as the song builds to the crescendo of the ending.

Without taking it away from any of the artists, but to round up the rest, we have the great Randy Bachman (from Bachman Turner Overdrive) takes the lead on the blues rocker of Got Nothin’ Left, and shows he has lost none of his voice or guitar talents over the years, while another 1960’s powerhouse of the Bay Area blues scene, Joe Louis Walker, tears into the up-tempo Crash And Burn and shows what 50 years on the road does for the innate guitar skills – with a great bit of harmony guitar duet as the outro to the song. Long-time collaborator Edgar Winter was tricky to write a song for (“Well Walter, I’m gonna tell ya – My first love is the blues. But when my brother started playing guitar, I figured he pretty much had that covered.”) and we get a smooth modern blues number in She Steals My Heart Away with some effortless harmony vocals along with a great saxophone break, just to complement the guitar playing.

Not to be outdone, John Nemeth provides a bit of electric soul to the blues of Too Much To Carry, and Trout’s son, Jon Trout, who started playing seriously only 3 or 4 years ago while his father was recovering from the liver transplant that was needed after he pretty much died of liver failure in early 2014, provides some family ties on Do You Still See Me At All, which has a real feel of Santana and Evil Ways about the melody and the guitar playing.

The opening to Ain’t Going Back hints of Nutbush City Limits, but falls into the Slydeco style of Sonny Landreth and provides yet another angle from the kaleidoscope of blues styles that this album shines the spotlight on……we tend to bracket “blues” into one big bucket, but the 14 tracks laid out here absolutely prove that there is a far wider variety of blues out there to be relished and savoured – and here it is all on the one record! Buy this one and feast on the table of blues delights!