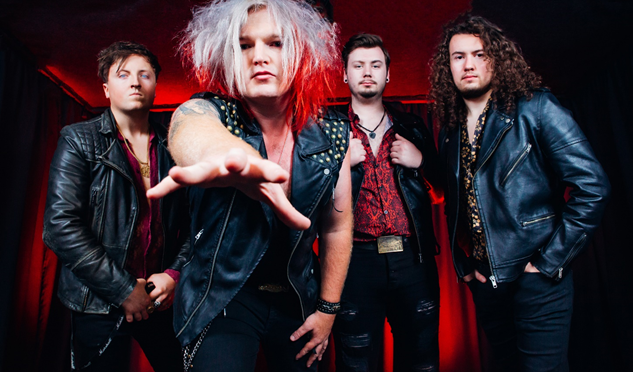 From winning the Battle of the Bands competition at the 2019 Hard Rock Hell festival, the band have worked hard to develop a sound that immediately had me scouring my memory banks and recalling one of my favourite albums of the last 10 years in Bad City’s Welcome to the Wasteland from 2011, which sadly was the only release from that band.  A look at that album’s pedigree from producer John Karkazis gives a few clues to the influences – Enuff Z’Nuff, 3 Doors Down, Adelitas Way and Pop Evil to name a few!

Twister have blended a real pop-rock sound of synth and sequencer with the classic hard rock guitars, crossing Fall Out Boy, Lost Prophets and Muse with a dash of Hoobastank in the sheer energy of the delivery, and vocalist Stevie Stoker having a cleaner tone to his voice than many of his New Wave Of Classic Rock rock peers, this results in a catchy high-energy rock album with heaps of melody and hooks galore.

The album kicks off with an intro-tape instrumental in We Are The Cursed & Corrected which leads into the catchy guitar riff and drum-led Save Us Yourself which has a crisp vocal delivery and an epic chorus which sees crunching bass and drums under the gritty guitars, and a tasty change of pace in the middle eight that sees Jake Grimes deliver some cracking accented chords.

Jack Corbett opens up Young & Affected with a powerhouse drum fill, and then in come the guitars with venom and bite.  The verse is all melody and delicate guitar licks, and then the pre-chorus builds up the tension before the gang vocals of “We Are” hit us and a truly monstrous chorus that is just killer.  Again the band provide some deft touches in the middle-eight, preferring to deliver tight riffs and hooks instead of lengthy guitar solos.

Stevie delivers a slightly emo-rock vocal to Natural Survivor which works well with the guitar lead and the strings behind the riffs, and the first solo of the record, which demonstrates the impact a well-constructed guitar break can have in a song.  There is a nice discordant feel to Trees, and some cracking drums adding to the punch of the guitars – the mass chorus and the minor key is what really brought home the Bad City comparison, and Stevie shows a real contrast and range in the vocals – and the band deliver yet another hook-filled chorus.  There is a dreamy interlude with Jack’s drumming really on point behind the atmospheric guitars and vocals, before the energy winds up into the double chorus with some deliberate accents, and some more huge harmonies, into a tight little ending.

The next up is a real mix of the two sides of Twister, as Wild & Lonely (Fingers Crossed) delivers solid riffs, great harmony vocals and a clinical solo, with powerhouse drums throughout on the one side, and the use of synthesisers and electronic drums to provide an extra dimension to the track.  More drums and another highly catchy guitar break leads into the melodic power pop of Trading Hearts, which is laden with radio-friendly harmonies, but still retains that edge.  The intro to the new single Call To Arms sees atmospheric piano lead into another radical riff and an emotive vocal delivery of the verse before the pre-chorus ups the ante into the riotous chorus that will just explode once we get back to live music on a larger scale.   There is a mammoth mid-section here which really lifts the band above the normal, and repeats itself as the song crescendos into the climax.

After the frenetic energy of the last three tracks, Mystery sees the band drop the volume to deliver a piano-led number, that is not quite ballad and not quite soft power-pop. It may be too similar in tempo to the rest of the album, while a really passionate full ballad might have provided more impact.  Of course this may be the one that breaks them in the US so what do I know, and Stevie does show an extra dimension in his range here.

A real change of sound and a hugely catchy vocal effect sets Feeding Frenzy apart from the run of the mill – think Gaslight Anthem crossed with Lost Prophets, and the way the song drives into the chorus, with the huge backing vocals of the “Whoa Oh Ohs” makes this a real feelgood anthem for the 2020’s!  Monroe is another slow-burner, and there is almost a U2 feel to the beat and guitars, before the powerful multi-layered chorus ramps up into some huge slabs of guitar and keyboards, with accents here and there, but a solid pounding beat throughout.

I love the penultimate track Fist Fight By The Waterside – it really has the whole package, with some intricate lead guitar work, a tight backing from the rhythm section, and then some brutal riffing and raw powerhouse vocals before a punkier edge kicks in for the chorus.  For a band that doesn’t really do guitar solos, Jake delivers a blistering solo with some deft touches complemented by Jack on the kit.  This would have been a cracking album-closer, in particular with the return to the accented riffs at the end!

As 64 White Lies starts with a keyboard echo you hope this will not be a let-down, with a gentle verse over the rippling guitars – and then the guitars open up with venom, and this blows up into another wall of melody and noise for the chorus.  There is a pause in the middle eight to allow us all to catch a breath, and then the boys let rip into the chorus to bring the album to a mighty conclusion.

I have reviewed a whole lot of excellent NWOCR records in the last few months from different sub-genres of “rock” and this is another one – the band has a clear and consistent sound throughout, crossing over the realms of contemporary power pop and melodic punk to deliver a really impressive debut album, and no doubt a cracking live show to go with it.