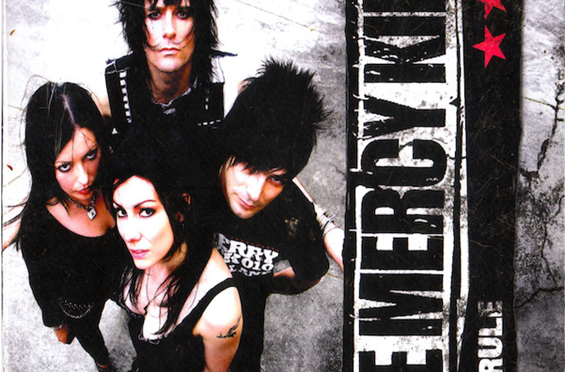 This is an interesting piece of Melbourne’s rock’n’roll history that finally gets to see the light of day thanks to the team at Golden Robot Records.

New Rule is the debut EP by Melbourne dirty / sleaze rock band The Mercy Kills. Written and produced in 2010, this five-track release has strong elements of the four members influences, with elements of post-punk, grunge and rock ‘n’ roll.  TMK are proud that it stands strong, alongside the music they have produced over the ten years since.

I’ve seen the band a few times in dirty, sweaty clubs, and big rock-show stages, and the levels of energy and raw power are always dangerously high.  I Wanna opens the EP with a suitably raucous riff, pounding drums and a thunderous bass line stabbed with some brutal chords before the dual guitars kick in hard for the shoutalong chorus.  The band takes a bit of a breath in the middle-eight before the tasty little Sigue Sigue Sputnik vibe drives us into the final chorus.

The guitars of Nathalie Gellé and frontman Mark E provide a punishing intro to New Rule which has an incessant groove to the beat, and some effective call and response vocals between Mark E and the two ladies in the band.  Another really tasty bit of chunky guitar splits the track before they run through the chorus again.  The production here may have been revived for the release, if not it delivers a really solid punch that belies the very small independent release intended.

Straight-up punky rock is up next with So Many Times with a full-pelt slice of grunge – with bassist Jen X Costello anchoring the track with such precision, and there are some awesome backing vocals that would do Joan Jett or The Runaways proud.  A similar feel to Fall, with epic power-pop (but really heavy) drumming from Josh Black, a song for 2021 indeed, as a post-punk inspired song about trying to keep control of your life, while things feel like they are falling apart around you.

The final track on the EP is Go, which sees the band deliver another slab of powerful rock, with drums and bass just monstrous beneath the menacing guitar harmonies, some more shouted backing vocals, and Mark E delivering the sleazy sneer of the lead vocal with just the right attitude – Billy Idol with real vitriol.

The band are still as hungry as ever, having supported the likes of Everclear, The Misfits and Courtney Love on Australian tours, as well as being regulars on the domestic gig scene before COVID-19 locked us all down and put a stop to live music in Victoria for many months.  The hope is that a new full-length album will be written, recorded and released in 2021, with the aim of live shows to promote it!

I’ve loved the band from the first time I saw them live…….and they have never lost the attitude that clearly comes through on this EP – they really deserve to get a full-on shot at the big time when they get that album released later in 2021!