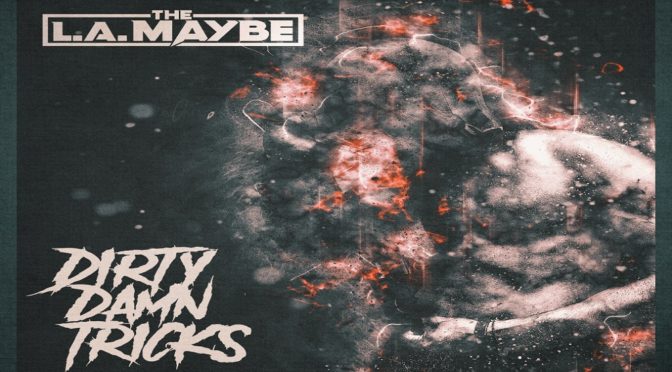 The L.A. Maybe is a 6-piece rock ‘n’ roll band hailing from the southern heat of the Carolinas.  If you’re a fan of Guns N’ Roses, AC/DC, or Van Halen, with a touch of Lynyrd Skynyrd and the Black Crowes then you will feel right at home adding these guys to your record collection.

Lead vocalist Alvi Robinson (who was one of only four singers to audition to replace Brian Johnson in AC/DC in 2016 – and lost his job in the process!) lays down gritty, passionate vocals while the rest of the band back him up with slithering riﬀs, huge catchy hooks, and ripping guitar solos.

The band has adopted the New Wave of Classic Rock moniker and really do fit in to the broad range of bands under the banner, from the UK’s The Treatment, Australia’s Massive, and the USA’s Tyler Bryant to name just three quality examples – and display clear influences from the old school such as AC/DC or Aerosmith!

Album opener Mr Danger has a “down under’ feel as Airbourne or AC/DC would deliver a set-opening punch, all strut and hard rock swagger in the guitars and the rock solid bass from Rahsaan Lacey and his side-kick Ryan Fosnow on the drums, and then we get smacked with the new single, Sucker Punch, which is a hi-intensity up-tempo rocker, with a flat-out Velvet Revolver riff, and a cracking vocal performance from Alvi, as well as a ridiculously catchy chorus!  The mid-section leads into a key-change solo and another ripper verse in the higher register! This is just over 4 minutes of intense hard rock, which would see any venue explode at the peak of a live set!

Oh Sugar is a bluesier mid-tempo number, which sees Alvi scale a wide range with the vocals, and the guitars of Dallas Dwight and Drizzle Silvera lay down a two-layer riff, part chugging and with delicate harmonies over the top, before the pre-chorus allows the guitars to really kick in, and the backing vocals in the chorus are a real treat.  Another ripper of a solo before a stripped-back segment which has a bit of a Thunder vibe, leading back into the back-half of the song.

The pace goes back up for She’s Reckless, with a corker of an underlying riff, with a bit of southern rock sleaze – it is so good to hear a band with two guitarists where they both go all out in the delivery!  This has that extra element of groove in the beat, and extra gravel in the voice, and an out and out classic rock delivery in the chorus!  The song then rips into a double-time riff for the solo, which is 1980’s LA glam rock all over!

There is more of a southern-rock feel to Peace of Mind, with the piano really adding an extra dimension to the melody, and a wonderfully harmonic segment in the middle that shows off the band’s vocal talents, and the band then delivers a true power ballad in When I’m Gone which manages to retain that Carolina feel through the near 6-minute length!  These two tracks really identify the band’s roots in the deep south, and are full of multi-layered guitars, searing solos, and lovely understated keyboards from Josh Thompson.   The solo first soars like an eagle, before dropping back down to an emotional vocal line that detonates into a massive wall of sound for an extended chorus, full of backing harmonies, wailing guitars, and a choir to add to the atmosphere leading to the outro.

Back to the hard rock with Take Me Away, and another catchy chorus over a quality riff – there is a touch of the Ugly Kid Joe / Warrant in here, all low-slung guitars, and powerfully delivered lead vocals, and some ripping licks amongst the noise – this is a belter of a track.  Fake is in the same vein, with a bit of party-rock in the tempo and the vocal delivery, a full guitar sound, and an up-tempo solo before a grungy riff leads into the final high-speed verse which sees Alvis spitting out words at 100mph!

Up Next To You feels like it might be another AC/DC soundalike, but after the opening riff the track changes into something quite different, and much better for the variety – this may be the most complex track on the album, and brings together all of the various sounds and influences into the one track, which needs listening to multiple times to really get a handle on it!

High-energy southern blues rock, with honky-tonk piano, wailing rock vocals, classic riffing, and an urgency that is common to all of the tracks on this really impressive debut album is all on show in the album closer, Sweet, with huge backing “Woah Oahs”, a wonderful solo, and that well-pitched but rough and raucous voice.

If this band gets the right level of exposure in the USA, they could be right up there with the supergroups – assuming they are as good onstage as they sound on the record – this is a band for stadium rock shows, able to cross over from southern to classic rock, and drag some of the straight-up metalheads along for the ride!