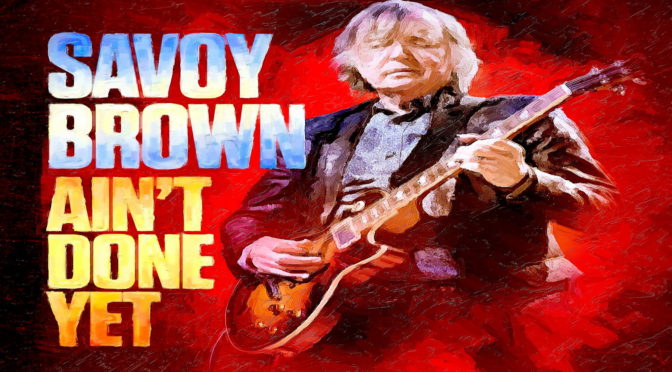 Simmonds has been with the band since 1965, and is joined on the record (which he also produced with the assistance of Ben Elliott) by the pair who have been the rhythm section since 2009, Pat DeSalvo on Bass and Garnet Grimm on the Drums.

The past roster of the band is enormous, with names such as Stan Webb (CHICKENSHACK), Bill Bruford (YES), ‘Lonesome’ Dave Peverett and Roger Earl (FOGHAT) and Paul Raymond (UFO) all spending time in the band.

Developing from the 1960’s British Blues Explosion alongside John Mayall’s Bluesbreakers, Chicken Shack, Fleetwood Mac and Ten Years After, the band toured heavily in the USA through the 1970’s and early 1980’s, but as the world saw musical genres come and go, Savoy Brown kept on playing the blues.

The album kicks off with the first single All Gone Wrong which opens up with a driving fuzzy-blues riff – think QOTSA playing a blues jam – and a low-drawl vocal that could be a much more “modern” band in the delivery, with little snippets of solo and lead breaks all through the track which show the cleanest tone contrasting sweetly with the incessant slightly grungy underlying riff.

A moody 6 minutes takes us down The Devil’s Highway which suggests a whole bunch of influences – until you remember that Mark Knopfler would have grown up listening to Savoy Brown before Dire Straits was even conceived.  This is a slow-burning number that has a slightly Doors-ish feel to the underlying beat, while Simmonds plays multiple layers of guitar all over the top of it.  River on the Rise has a totally different feel to the guitars, with a jangly acoustic rhythm guitar line that provides the accompaniment to the slide guitar, while Simmonds provides the laid-back drawl of the vocals.

Borrowed Time kicks off in true dirty, gritty southern bar-room blues style, with a deeper voice this time that fits perfectly over the infectious groove of the riff, and the slightly distorted lead breaks that abound, thanks to some old “Multivox Full Rotor” gear in the studio.  Bass and Drums are just perfectly in sync, letting the track just roll along while Simmonds delivers a suitably tasty solo.  The title track, Ain’t Done yet,  is a more upbeat bouncy blues, with a wonderfully casual set of backing vocals, that gets the foot tapping and allows Simmonds to do what he does best – delivering little lead breaks and snippets of ripping guitar in between the lines of the verse and chorus, and slips at least a couple of solos into the track.  This is just classic blues at its best.

There is a soulful latino vibe to Feel Like A Gypsy, in both the guitar-playing and the voice – very reminiscent of Carlos Santana in his prime – with the latin percussion ticking away in the background with the stripped back accompaniment.  The 6 minutes here also gives Simmonds more opportunity to stretch out a bit on the lead guitar solos, and an extended improvisation through to the end of the song.

Simmond’s John Lee Hooker influences come to the fore with the straight-up boogie of Jaguar Car, which has that ZZ Top La Grange feel to the riff, and the harmonica trading licks with the guitar lines.  The vocals are so world-weary that they sometimes disappear into the background, and just adds to the overall sensuality of the delivery.    Another change of direction, and the country sound of Rockin In Louisiana switches to the steel dobro for another acoustic sound, and again the boys throw out a lazy backing chorus of “Louisiana”.

I love the dark dirty riff of Soho Girl and the whole band gets into the groove for this song, which Simmonds has had versions of for years without ever being really happy with the recordings until now.  It is slow, deep and fuzzy and has a cracking bass line from DeSalvo, and some of the best guitar work on the record.    The album closes with the dreamlike instrumental Crying Guitar, a slow and moody exercise in harmony with Simmonds wringing emotion from the guitar like few other blues guitarists ever – this is the sort of track rock and blues fans would be gushing over from the likes of Gary Moore or Santana, so let’s hope this album generates some more interest in this stalwart of the British Blues-Rock world.

The only concern for me is that I now own one Savoy Brown record…..and there are 40 others out there to explore in the back-catalogue, which will be a time-consuming and expensive business!

Savoy Brown’s new album “Ain’t Done Yet” is available to pre-order from http://smarturl.it/AintDoneYet