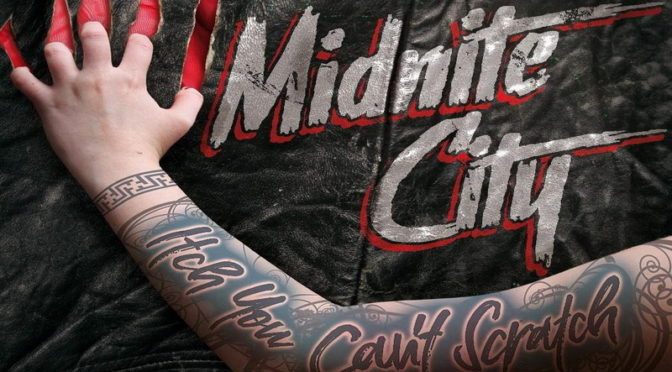 Since bursting out onto the scene with a vengeance in 2017, Midnite City have taken on the world and hustled themselves to the top of the pile to be considered one of the top modern exponents of quality melodic rock.  Their debut self-titled album was a cracker, with Harry Hess mastering their demos, the full band being pulled together, and the formal release gave enough support for the band to be considered as leaders of a resurgence in commercial AOR hair-metal heaven!

Following on from the release of their sophomore album There Goes The Neighbourhood in late 2018 (which was voted 5th best Melodic Rock album of the year in Classic Rock magazine and also made the list of the best albums of the past 35 year history of Japan’s Burrn! magazine) the band have gone from strength to strength and proven to be one hell of a force to be reckoned with in the live arena.

The band even managed to get over here to Australia for the sadly ill-fated Melodic Rock Fest in March 2020 and their excellent shows with Reckless Love turned out to be some of the last events of Melbourne live music prior to the COVID-19 shutdown.

There have been a massive number of quality rock albums released in the UK and US in the COVID era, however it is fair to say that few of these are really in the 1980’s melodic rock vein – mostly being at the harder-edge of the spectrum, or further down the blues-rock / classic rock road.  A few exceptions to this include FM, Vega, Degreed, W.E.T. Chez Kane, Joel Hoekstra’s 13, Harem Scarem and Australia’s own Wicked Smile, and there are also a number of high-quality bands out there such as H.E.A.T. Crazy Lixx, Eclipse and Reckless Love of course – so there is clearly a market for this unashamedly retro genre, when done well.

A few listens in to Itch You Can’t Scratch and not only do we have a candidate for melodic rock track of the year in Crawlin’ In The Dirt which is just a belter of a fast-paced rocker, with a brutal bass-line from Josh ‘Tabbie’ Williams, and vintage keyboards from Shawn ‘Keytar’ Charvette. The track brings to mind Swedish trash rockers Gemini 5 twinned with Hysteria-era Def Leppard, and sees main man Rob Wylde (Tygertailz and Teenage Casket Co singer) deliver an effortless lead vocal over the melodic mayhem going on beneath!

The Leppard vibe continues with the truly awesome Atomic, which is certainly not a rip-off, melding some early Van Halen, and modern Scandi-AOR into the mix, and the layers of keyboards add a party-rock feel to this one.  After the excitement of the opening two tracks, we get a mid-paced power-ballad in Fire Inside, which allows Wylde to really excel with his vocal range, and is probably more in line with the overall Midnite City feel – the harmonies here are enormous, and there is some ridiculous guitar work happening in the background from Miles Meakin, who delivers a fine set of chunky melodic riffs and endless guitar-licks that keep popping up the more listens the record gets.

Darkest Before The Dawn is another chugging monster, slightly darker and sleazier through the verse, with more of those ethereal keyboards whirling around behind the melody, and the chorus picks it up a notch, with a blistering solo from Meakin, and some impressive drum work from Pete Newdeck who adds such a lot to the band from his extensive background with Eden’s Curse, Newman and Vega, as well as his production skills.  The band does a fine job in harnessing all of the most AOR-ish song titles, and I Don’t Need Another Heartache hits the mark from all angles….the super catchy “heart heart heart” line is so clever.

Party-rock anthem Blame It On Your Lovin’ mixes Danger Danger with Thunder at their finest, and Meakin is on fire with guitar-breaks to burn.  The lyrics are tongue in cheek, and the track really adopts a much more modern melodic rock feel, such as New Device, Night By Night and of course Vega, and while Rob Wylde would be the first to say he does not have the most powerful rock voice, he really knows how to use what he has to the absolute best effect, and sounds better and better on this record.

There is a cinematic epic video for They Only Come Out At Night which is the latest single from the album and is both kitschy and sophisticated (co-directed by Charvette), and the intro to the track has a bit of MCR referenced, before the vampire-d up band kicks in with a riff that Steve Clark and Rick Savage would be proud of, and a pre-chorus that is almost too close to the Lepps for comfort – but it all works so beautifully – and those “Woah Woah Woahs” really hit the spot.  This is the track that shows Midnite City has grown and developed over the past 5 years, and should be the standard against which they are measured in the future.

There is a raunchier edge to Chance Of A Lifetime with a deeper tone to the vocals in the verse and a grungier riff, before soaring into yet another wall of harmonies for the chorus, and some equally harmonised guitar work in the solo.  A piano-driven power-ballad is up next in If It’s Over, with all the strings and voices providing an immense sound to the pre-chorus, and Wylde delivering an impassioned voice in the stripped-back verses, before the intensity returns for the chorus.

The album closes with another up-tempo rocker in Fall To Pieces, which probably is as close to the definitive Midnite City sound as anything else – the band powers along in the background, the harmony vocals are supreme, and keys and guitars add the warmth and texture, and there is another short and sweet piece of awesome fretwork in the solo.

Having seen the band live, there is some extra power and roughness in the delivery that will lift this further up, and the band’s delivery has all the hallmarks of those epic MTV AOR videos from Bon Jovi, Poison, Leppard and the rest – which you can bet will leave most of the crowd hoarse and smiling at the end of the night!  This is not an innovative or hugely original piece of work – but it is a pretty damn fine effort and will be up there in the top 10 melodic rock records of 2021 without doubt!