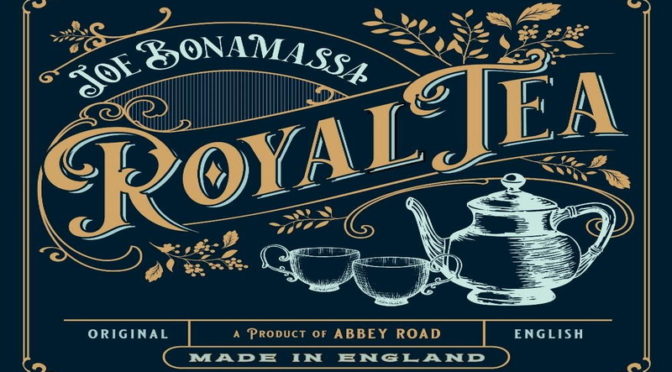 Inspired by Jeff Beck, John Mayall, Eric Clapton and Cream, and recorded at Abbey Road studios under the control of Kevin Shirley, with songs co-written by JB and some notables including Jools Holland, Bernie Marsden and Cream-lyricist Pete Brown, the Royal Tea album recalls the impact on a 12 year-old Bonamassa finding these greats of the British blues scene in his father’s vinyl collection, and seeks to resurrect that classic British blues-rock energy in a bunch of new songs.

The album opens with a sweeping orchestral film-score introduction which leads into the wonderful guitar tone of the main riff of When One Door Opens, stripping back the volume for the harmonised vocals of the verse, and then opening up wide with Joe’s voice providing the power of the chorus.  The song fades out until the most explosive re-entry of a monstrous riff that retains the tone but could be from a totally different song – not unlike many of the Blues-Explosion bands this is paying homage to.  The solo that follows is just wild and the band lets rip with long-time drummer Anton Fig having a ball with the staccato punches that almost close the track.

After the warm tones of the opener, the brash clean riff of Royal Tea pairs well with the keyboards of Reese Wynans that are front and centre, along with the funky backing vocals which provide the response to the lead vocal’s call, and again I’m struck by the sheer quality of Joe’s voice.  The guitar playing is right in character here, and the solo really takes you back to the 1970s, with plenty of guitar harmonies that provide so much more than just another solo.

A drop in tempo for Why Does It Take So Long To Say Goodbye which opens up like a gentle soft blues ballad, and develops into something out of the Whitesnake power-ballad library, and then again flips into a mid-section that offers a grinding fuzz-tone riff paired with some delicate picking, before ripping into a glorious pair of solos that bracket another chorus.  A crushing bass intro from Michael Rhodes leads into Lookout Man, with a sleazy dirty riff, raucous lead vocals, gravelly harmonica and the tightest crispest drum work that provides a perfect groove.  There is a ripper of a solo, a duel with the harmonica, some old-school Motown backing vocals and a few neat little features through the track, with Anton Fig never letting the energy drop for a second.

Another U-Turn from British classic blues rock straight into the pure and clean Americana of Savannah, which includes some gospel organ alongside the piano, and some wonderful soaring harmonies in the chorus, as well as some sort of mandolin and fiddle that provide the real southern country feel.  Back to the 1960’s with a Booker T feel to the opening of High Class Girl, and that signature guitar tone, the organ, and a rich vocal delivery that leads into a hook-laden chorus.  The song has a slinky feel that is highlighted by the tasty little lead breaks, and the stops that punctuate the track.  Joe delivers a tight gritty solo before the back rocks back into another chorus and the keys and backing vocals take us to the climactic close.  Released as a single earlier in the year, A Conversation With Alice which is a bright mid-tempo rocker, featuring a series of intricate segments that show off both Joe’s guitar playing, but also the drumming and keyboard skills of the band.

Back to the rockier side of the blues for I Didn’t Think She Would Do It which powers out of the blocks as if going to be a blistering instrumental, with an ethereal guitar harmony line, and then the verse kicks in like a Black County Communion monster, all power chords, Hammond organ and power drumming, a chorus with a crowd backing, and then JB delivers a masterclass of the Wah pedal through the first part of the solo, before a refrain of that harmony line with the drums powering along beneath.  A final verse and chorus leads up to another little solo and the crescendo of an ending – Phew!!

Beyond The Silence is one of those epic JB tracks that he delivers from time to time, with enormous power and a breadth of emotion that comes both from his guitars and the voice.  The track has multiple layers and ranges from brittle delicacy to soaring fury, without ever losing the focus through self-indulgence.  This track would not be out of place on any of Joe’s albums, but feels right at home here too.

We almost get back to the 1950s with the Big Band feel of Lonely Boy that leaps out of the speakers with a wonderful texture of that blues guitar, the honky-tonk piano, and a stonking brass section which will have toes tapping and heads nodding throughout.

This record, on first listen, is less of a blues guitar masterclass for Joe Bonamassa, but more a beautifully crafted set of blues / rock / jazz influenced songs which would not be at all out of place in the smoky clubs of the London blues scene of the mid to late 1960s alongside Jimmy Page, Jeff Beck and Eric Clapton, with all of the excitement and energy of those maestros and their bands.

Joe Bonamassa has never been one to follow a trend, and is not afraid to explore new areas of the blues and all it’s influences and derivatives, and he consistently delivers material that is both technically extraordinary, but has an emotional strength and power that never fails to impress.

Pre-order the album from www.mascotlabelgroup.com/Joe-Bonamassa-announces-new-studio-album-Royal-Tea-Pre-order-now