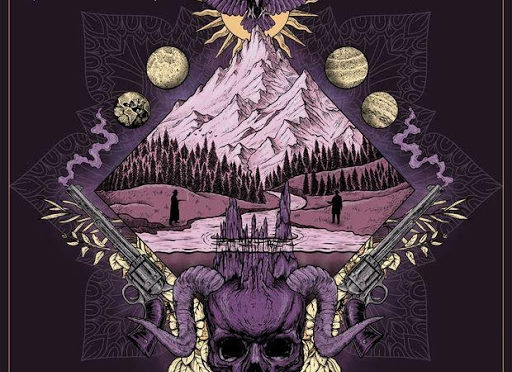 This is a debut album to be rightly proud of – after a couple of earlier EP releases, Welsh southern blues rock band Everyday Heroes have produced A Tale of Sin & Sorrow, that is in part a concept album following the redemption pilgrimage of a young outlaw, Texas Red, as he tries to turn his life around and become a better person.

DTF Media flagged them as serious contenders on their EP release – “They’ve produced 5 very well written hard rock tracks that contain a plethora of heavy riffs and a well-rounded structure that just oozes quality production and a definite promise of their future in the rock scene”.  Wise words indeed.

Another recent media release from Wales Online tagged the band as “one of the 11 most exciting bands and artists in Newport” which may not be what the boys want as an epitaph…….as I know of no other Newport bands I will reserve judgement and just talk about the music!  One thing for sure is that South Wales is producing some high-quality blues rock, with the likes of Those Damn Crows and Buffalo Summer being regulars on the NWOCR scene.

In keeping with the theme of the record, the review follows the journey of the central character in order, although having played the record a couple of times on shuffle, this is still a cracking rock album.  We meet the outlaw in the opener, Texas Red, and this explodes from the speakers with a huge bass and drum sound behind the dual guitars of Luke Phillips and Daniel Richards which all ties in with the band’s stated influence of Kentucky rockers Black Stone Cherry – Luke’s vocal style much like Chris Robertson.  The guitar work is excellent throughout the opener and this is a great way to start the album.

Find My Way gives us a bit of a retro psychedelic guitar lick, and some raucous backing vocals from the boys, and then gives up a hint of Gorham / Robertson era Thin Lizzy guitar harmonies before another ripper of a solo.  The track has a real sense of movement as it rolls along.

The latest single of the album was released recently and Standing Stones has a real energy to the crushing opening riff, and is full of catches and hooks, and lets Luke really stretch his vocal chords while the guitars run wild beneath him.   The more I listen to this, the more of the really intricate guitar production I hear, and it really is excellent.  The same feel runs through The Witch’s King albeit with some different effects going on with the guitars, and there is a tasty little middle-eight segment before the main solo that punctuates the track nicely.  This is heavy guitar-driven rock of the highest quality.

The first single from the album has been out for a while, and Soul To Save has a bit more of a brooding feel to the verse, with lots of space and some tasty drum fills from Jay Haines.  The heavily distorted guitars can be compared to Nickelback (which is not in any sense a criticism) and Stone Broken, and really provide a complement to the big voice that Luke possesses.   An intricate southern rock riff opens up Victorious (Take My Chains) and this again has that big BSC feel, interspersed with some ridiculous guitar licks, and some atmospheric backing shouts, before the solo which runs over a Stormbringer-era Deep Purple riff.  More than halfway through the record and there is nothing close to a filler yet.  All Outta Faith has a bit of a funky groove to it and a lovely melody to the chorus, and a brief but scintillating guitar solo.

A gentle acoustic guitar intro to The Crow allows Luke to deliver a soft smooth vocal line before the song cranks up into a southern rock power ballad that delivers an emotional punch as it builds into the soaring guitar solo, and then dips down into the intensely soulful outro.    Breathe Again is as solid as the rest of the album with a bit of a twist in the guitar riff underneath an eastern-tinged solo and a vocal mid-section that is really impressive.

Back up comes the energy with the twin-guitar assault of West of Forever which may be the riff of the album, like Monster Truck on steroids, and a darker vocal delivery in the verse, which morphs into something happier and clean for the chorus.  If there is anything lacking here it may be in the mix, where the drums could perhaps do with being brought up to give them more prominence (but then I’m a drummer!).  There is a surprising piece of trumpet over the ending to the song which fits really well over the staccato riff and snare.

The album finishes with a slower-paced track in Without A Throne – a bit of a slow-burner that builds up the power and emotion, and provides a slightly melancholy but fitting end to the journey.

The band has delivered a complex and beautifully crafted lyrical album here, with powerful riffs and a solid backing section, led by the strong voice of Luke Phillips and the twin guitars of Luke and Dan, and the listener can either just relish the quality of the songs and playing, or can really dive into the underlying spirituality of the story of our outlaw’s journey from the depths of his brutal acts, through self-realisation and the seeking of redemption and ultimately peace.  Nothing about the record comes across as pretentious, so the guys have delivered something quite special without appearing to try too hard!