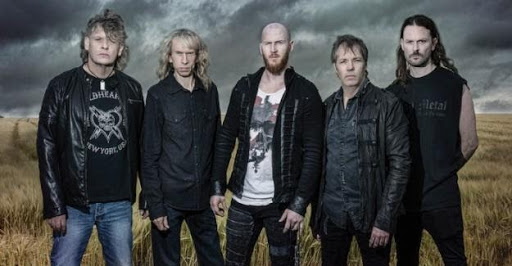 LIGHTNING TO THE NATIONS 2020

I will never forget the day that an LP envelope arrived at the house sometime in 1980 – and in that was a plain white album cover, with a signature in the top corner, and a vinyl LP with a blank white label inside!  This was one of the first run of 1,000 albums sold at gigs or mail order from the band, and it remains a prize possession today.

Diamond Head were one of foremost bands of the New Wave of British Heavy Metal movement, and were lauded at the time by the likes of Metallica, who covered some of these tracks in their early sets, and released Am I Evil as a cover in 1984, and Megadeth as being important influences of their sound.

40 years on, and not only is guitarist Brian Tatler still pumping out some killer riffs in the recent albums, and delivering an epic live show with his current band.  This is the band which has re-recorded that seminal first album, and have added some classic covers to the package Judas Priest’s Sinner, Led Zeppelin’s Immigrant Song, Deep Purple’s Rat Bat Blue and a stunning take of Metallica’s No Remorse, as a nod to that band’s continuous support of Diamond Head.

The original band featured the distinctive voice of Sean Harris, with lots of intonations in the Robert Plant mould, and current frontman Rasmus Bom Andersen has a much cleaner style, with the power and presence that fits well with the pile-driving guitar riffs that are Tatler’s trademark, and there is an added rhythm guitarist in the mix now which provides more depth to the sound.

The album opens up with the huge chords, wailing vocals and driving riff of Lightning To The Nations, before cutting the tempo to the ultra-heavy verse, and whipping back up to the chorus, with the distinctive vocal line being given added power and harmonies by Rasmus.  Once anyone has heard this chorus, it will remain in the memory-banks for good.  The solo section includes some tidy Thin Lizzy-esque harmonies and a powerful riff-segment that is repeated in the ending.

The Prince was the track I struggled with at first because of the some of the discordant guitar work and challenging tempo-changes, but is an absolute screamer of a track, high-speed, with intricate guitar work, belting bass and drums, and an eerie vocal melody,  but this is such a powerful version, and entirely in keeping with the feel of the 1980 band.  The twin-guitar melody in the mid-section, and the clean solo that follows are just epic.

The opening to the NWOBHM classic Sucking My Love is just as powerful in the new version, with Tatler’s riffing over the driving bass line of Dean Ashton.  Bom’s vocals have kept some of the unique touches from the original which was a perfect showcase for Harris, and has made it his own.

There is also the atmospheric mid-section retained, with it’s Page / Plant vibe in the interplay between guitar and vocals, and this breaks into another electrifying solo below the operatic crescendo of powerchords and choir, and a return to the riff that certainly displays the sort of detail that you can hear in the Metallica songs that came after this.  The band has re-energised the closing section of the song to allow Tatler to completely let rip, over some rock-solid beats from Karl Wilcox on the drums.

There is an Armageddon feel to the intro to Am I Evil which never gets old – this was ground-breaking in it’s day, taking the ominous feel of early Black Sabbath and melding it with a more modern brutal feel.  At eight and a half minutes this is a massive slab of metal, and again the vocals are a nice mix of the Tatler sound and the purer power that Ras delivers.  The up-tempo mid-section powers along through to the solo which has lots of classical-music echoes, and a beefed-up double-kick drum pattern which really works in keeping pace with the high-impact riffing.

The one track which has been considerably re-worked is Sweet And Innocent, which almost sounds like a different song, with the dual guitars and a slightly amended vocal pattern.  I always loved the original, which was a pretty commercial slice of melodic hard rock, and has been given a huge production work-over, with big backing vocals and having the rhythm guitar of Andy Abberley in play allows Tatler to roam free over the top with the solos.  It’s Electric has also had the vocals cranked up a notch, without losing the crispness of the original – a real 1970’s hard rock feel with the thrashier sound of the guitars, and this is accentuated in the solo, with the accented drums providing the tempo, and the two huge choruses that close out the song.

The album-closer, Helpless, is another seven minutes of melodic thrash which runs helter-skelter through the Tatler book of riffs, and then blows you away with the technical elements where the guitars, bass and drums all work together to build-up into the mid-section which is all guitars and power-vocals, before the track delivers the final versions of the chorus in all its glory.  One of the things about this record is that despite the brutally thrashy nature of many of the riffs, the vocals are always melodic rather than threatening.

An early review of the album stated that it contained more riffs than the first four Black Sabbath albums, and certainly Tatler has been able to weave something of a progressive rock pattern into some of the songs, which contain three or four separate riff structures and melodies, but they never feel to be wandering off aimlessly without a clear intent, and often re-appear in a different form later in the track.

So if you grew up listening to Metallica and the other thrash bands of the early 1980s, do yourself a favour and grab a copy of this re-recorded and re-energised slab of NWOBHM history – you could make me an offer for my original copy, but it would never be enough!

The four bonus tracks are solid versions of three different influences of the band, and an immense version of a track that was hugely influenced by the Diamond Head record.

Metallica’s No Remorse is a monster, and is executed brilliantly by the band.  The version of Immigrant Song is OK, but would be a pretty tough one to do justice to.  Tatler gets a terrific guitar sound in Sinner, and throws in those impeccable KK Downing licks just as they should be, while Ras doesn’t make any attempt to copy Rob Halford, singing it pretty straight.  They do a faithful version of the track, which as one of my all-time classics I am grateful for.  The complexity of the track, and the different elements to it do provide some food for through in terms of the way some of the Judas Priest sound may have influenced the band.

The Deep Purple track, Rat Bat Blue is not the most obvious pick, being from 1973’s Who Do We Think We Are album, but has a solid riff that very much fits in the Tatler-mould, and the band have provided a worthy cover of a track that must have a special place in the Diamond Head back-story.