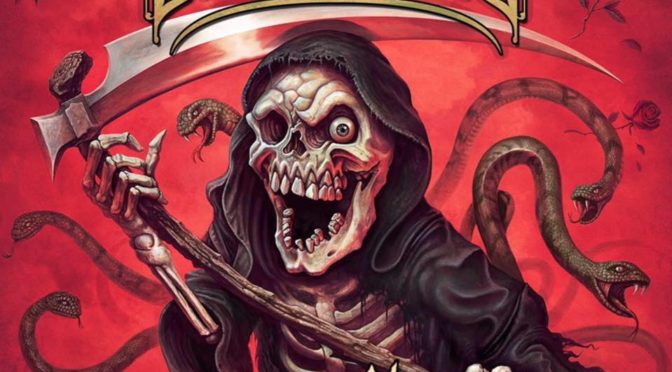 “Hard Melodic” Birmingham rockers DevilFire released their debut album Dark Manoeuvres, back in 2017 to high acclaim, and they are thrilled to announce that their brand new album Black Soul Vendetta will be hitting the streets through CARGO Records and all reputable platforms on Sept 4th.

The band are Alex Cooper on Vocals, Baz Blackett and Kieran Topp on the guitars, Jamie Downes on bass and Lars Wickett (Uli Jon Roth) behind the kit, with a few additional musicians appearing on the album, including Eric Dover (Slash / Jellyfish) in a vocal duel on Chasing The Pain.

Produced and mastered by their frontman Alex Cooper (producer of Shy, Spike of the Quireboys etc),  after having soft launched it on their fan site in late 2019 the pandemic kicked in and everything had to be put on hold; but rather than it be a negative with the extra time they’ve have had they have been able to create an even better product, signed a management deal with TMR, and thanks to the Cargo Records involvement now have  a vinyl edition as well.

There is an instant bite from the overall sound of the band in the opening track Cruelest Animal which has a mammoth classic rock feel and bounces along in a guitar-driven groove, with some effective anthemic harmony vocals, and this really sets the tone for the rest of the album.  Twin lead guitars and a heavy use of keyboards combines to deliver a complex multi-layered depth of sound, and the arrangements really build on that to deliver a complex and enormous product!

The vocal duet with Eric Dover, Chasing The Pain, blasts through the speakers with a cracking riff and a brilliant horn section accenting the melody – the two singers really work well together and there are more hooks in the one song than in a whole load of albums!  This one recently won the public vote on Classic Rock Magazine’s Tracks Of The Week, earning over 50% of the votes cast.

Live A Lie features a neat little guitar interplay from the Thin Lizzy repertoire over the opening riff which is repeated through the track, driven along by some tight drumming from Lars, and a sweet solo from one of boys!  Alex has an interesting voice which appears to seamlessly flow over and around the rest of the band and provides a perfect complement to the backing tracks.

His voice really comes to the fore in Vendetta, showing a terrific range, while Lars smashes out the beat on the toms, and the guitars rip out a menacing riff through the verses, with a searing solo tucked into the track just before a chunky middle-eight that drives into the final chorus, and a guitar-heavy outro.

A bit of police siren and radio chatter fills the airwaves as the band piles into Dead Man Walking, and the core riff to this is a killer, with more brass and keyboards that really contribute to the overall sound – layered guitars, huge vocal harmonies, backing keys and synths, and anthemic choruses all over the place.  There are elements of The Foo Fighters, Monster Truck, Queen, Winger, Boston and some of the harder-edged 80’s melodic rock giants of Loverboy, Strangeways, Honeymoon Suite and Y&T infused with distinctly modern and slightly grungy feel, such as Hoobastank, Harem Scarem and Paul Laine-era Danger Danger – whatever the mix, it certainly works!

The single Dream Evil brings to mind some classic Blackfoot (Teenage Idol) just in terms of the immediate riff and part of the chorus, but it soon takes on a life of its own, and showcases the guitars and the ability of the band to come up with some superb hooks in the monster-choruses.  Opening with yet another one of those huge choruses, Justify is a brilliantly structured commercial rocker that owes much to the complementary nature of the twin-guitar lines that flail over the backing track, and Alex gives another wide-ranging vocal performance that covers both ends of the scale.

Sell My Soul is all about the riffs, and a contrast in the vocals which are all about power, and I love the monster drum accents that lead into the closing chorus.  You’re Gonna Break My Heart heads off at a steadier pace but in much the same rhythm and cadence as the opener, and of course has yet another one of those multi-layered slabs of vocals that are something of a signature for the band.  There is a hypnotic rolling keyboard melody that underpins the track, and some nice tubular bells to increase the warmth that oozes from the speakers.

The keyboards come to the fore in What You Pay For, before the intricate voices play through the verse, and then the instant hook of the chorus delivers yet another tick on the ledger!  Devilfire is a band that has you scouring the musical archives to try and work out if they can be tagged with any particular influence, and I have clearly failed to tag them with anything specific.  There are familiar melodies and nuances throughout, but the whole thing forms an absolutely stunning and consistent sound that is just Devilfire!

There is yet another different feel to the darker Black Soul Bones which swings along at a jaunty tempo that has even something of a big band swing beat to it, and an inspired change of pace mid-chorus that really accentuates the timing.   Decadence is a more straight ahead modern rocker that makes great use of the harmony vocals and features some tasty guitar soloing as the rhythm section maintains the intensity from start to finish.

The power-ballad of Wasn’t It Love is the closer to the record and is worthy of any of those epic AOR bands, sung with power and emotion, and a bit of swagger in the band that eliminates any sense of a dirge and keeps this as one of those spine-tingling, goose-bump, lighter in the air tracks that will really leave an impact on the audience.  There are some sizzling guitar breaks as the song slowly fades away through the outro.  This is one hell of a record!

BLACK SOUL VENDETTA will be available on Vinyl, CD, download as well as streaming platforms, and can be pre-ordered at www.devilfire.co.uk