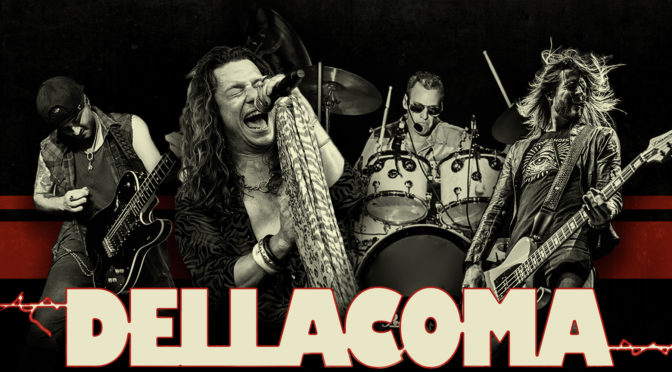 As someone who first came across Dellacoma fronting Sydney rock band Sunset Riot in 2012 or thereabouts, I have always been interested in seeing what he has been doing – and the first solo album South Of Everything that came out in 2015 was a terrific opening release.

He did a bunch of stuff in the US with Jasin Todd from Shinedown, and has been active in the Australian INXS show prior to COVID-19 coming along – and this new album has been in the making for a while.

Recorded in Sydney, Altona and some bass parts in the USA, with considerable input from the versatile Voya Milutinovic (Bad Moon Born) on guitars, songwriting and production duties, Noel Tenny on the drums, Jaron Gulino from Heavens Edge on bass, and an appearance from Tracii Guns on Kill Your Idols, Blood is an interesting mix of influences from classic rock through a bit of grunge to modern hard rock.  I have to admit it has been something of a challenge to get my head around the whole thing – there are some really good tracks here, and the whole package is well put together – and Dellacoma’s voice is as good as ever.  Perhaps I am trying too hard to categorise the record, when in fact the album is just a really good variety of hard rock songs, full of hooks, melodies, sizzling guitar work, and delivered by a super-tight band!

The record kicks off with Adrenaline, a commercial slice of rock, with some distorted vocals and guitars, and a wonderfully melodic chorus full of keys and harmony vocals, and some cracking guitar work in the closing bars which sets the scene for the rest of the record.  Drums, guitars and a monster riff kicks off Defiance, before the vocals snarl in like a modern-day Velvet Revolver – fast-paced and aggressive, this is perhaps the track I like the most on the record.  It may be considered a bit too derivative, but Dellacoma and Voya absolutely own this one, delivered with massive attitude, and make this a signature track.

Third cab of the rank is the opening single, Kill Your Idols, featuring Tracii Guns on lead guitars, and this is another very commercial modern rock track, with a crushing main riff, some impressive bass and drums behind the guitars, and a vocal delivery that is part Kip Winger and part Scott Weiland, and then a masterful solo – the track fades out way too soon for me!

After the frenzied opening from the trio of rockers, we get a slight shift to a more discordant and atmospheric number in Akashic Memory, one of the tracks with the music written by Voya, and this is a little bit trippy, but with an intense guitar riff throughout, and some tasty little lines and licks, while Dellacoma channels a bit of his INXS persona into the vocal line.  The drums on here are enormous from Noel Tenny and really provide the solid backbone for the track.

Leave A Light On is not far off melodic rock heaven, with a Bad English / Alias feel to it, co-written with Jasin Todd, and seeing some wonderful layered vocals through the chorus, and more excellent guitar work from Voya.  Upbeat but in the same vein, I Don’t Want It co-written with Melbourne legend Mitch O’Shea, this is a straight-up, top-down, summer party-cruising anthem, and Voya rips out another cracker of a solo – love the little “That’s Good” at the end!

Ballad time comes along with the very different Lady Undertaker, all piano, strings and acoustic guitars, and a breathy plaintiff vocal that really fits the melody and tone through the first half of the song, and then it builds and builds into a riff right out of the Reb Beach playbook, with discordant vocal line and melody to burn – allowing Dellacoma to blast out the vocals, before the explosive solo, and the orchestral epicness of the closing segment.  Credit to the rhythm section yet again – Anthony Esposito on bass and Noel on the drums, making this 6 ½ minutes of AOR immensity.

Crushing guitars, riffs and soloing, kicks off Red Pill Pocketwatch, with a menacing vocal in the verse, leading into a super-catchy chorus – “I wanted just to make it out of here alive!” while the band powers along beneath.  There is an unashamed tip of the hat to a Led Zep middle-eight which changes the beat but retains the tone, and Voya throws some wicked soloing over the top of the riff.

A bluesy rock guitar opens up 7 Years, and the beat is driven along by the tom-tom rumble, and a muffled vocal line, before the chorus breaks out into another one of those melodic rock veins.  This brings a real contrast into the track, between the dark and gritty verse, and the uplifting harmonies of the chorus.

Album closer Stay is the one track written in full by Dellacoma, and has a slightly alternative melodic rock vibe, from the jangly guitars to the voice, which reminds a little of the Goo Goo Dolls and their like.

There is a lot to like here, and the music ranges across a broad spread of what we know as rock, which may open it up to a wider audience – there are certainly a couple of radio-friendly rockers, some crushing live tracks, and enough surprises to make each listen reveal something different to like.