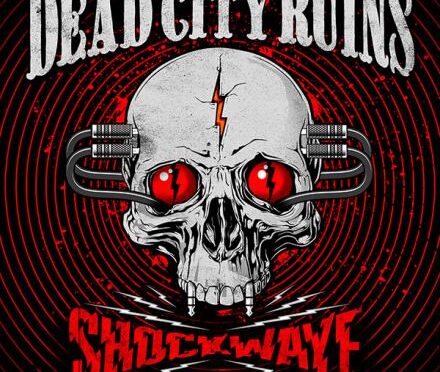 Following this up with relentless touring, more album releases, some line-up changes, and after a slight production delay, we get the immense slab of new music that is Shockwave.

Bass and Drums from Luke Bolton and Nick Trajanovski are the rock on which Vision is built, and another ripper of a riff from Tommy “TBone” Cain and Sean “Blanch” Blanchard, and Walsh shows a glimpse of his real vocal range with a slightly guttural voice in parts of the chorus, and soaring lines in the verse.  Madness has a more deliberate tempo, with ponderous bass and drums under the guitars, and Welsh delivering a slightly menacing verse, before the build-up to the climactic chorus.  There is a great combination of true classic rock and more modern elements, such as Monster Truck or even Royal Blood here.

Speed Machine sees both guitarists absolutely tearing it up over a rock-solid beat, and the riffs in the pre-chorus are sensational, before the powerhouse chorus that has Welsh giving us a hint of his vocal flexibility – this could be an Audioslave or Velvet Revolver out-take, and then we get a retro dual guitar-lick as the preamble to the final chorus.  A major change of feel brings us to the softer opening of Rain, all jangling southern-rock guitars and spacey vocals, before driving into a much more modern-rock chorus, with echoes of Soundgarden and Alice in Chains.

A favourite already, and destined to be a live favourite, Dog On A Leash spits out of the speakers with venom and passion, and an epic set of backing vocals, some searing guitar licks behind a truly awesome lead vocal – leading into a blistering guitar solo that takes us to the singalong chorus, and the signature riff to close the track.  The same vibe hits us with This Side Of The Dirt which rattles along courtesy of some great drums from Nick T, and a scintillating opening machine-gun guitar break – after the verse / chorus / verse / chorus set this morphs into a great middle-eight piece, all bass and drums with the guitars building up through shared solos, into a brief false-ending, and then the full-on final chorus.

A heavy slow blues rocker with a serious swaggering groove, Drifter has a pulsating and raucous bass sound from Luke B, and a great catchy pre-chorus that leads into the towering vocals in the chorus proper.  The new singer has brought a new dimension to the vocals, but he will also deliver the older songs with the same intensity that Jake W used to provide.  More to like with Spiders, with some piercing guitar work in between the slightly disturbing, dark vocals, before a cracker of a bridge that totally changes gear before the top-speed solo, powering down into the solid chorus again to the finish.

End Of The Line delivers more of the same without really standing out, but does have a neat twin-guitar break in the mid-section that is really old-school.  Blood Moon is something else altogether, which showcases all of the talents of the band members, brought together in a massive-sounding production.  The harmonies in the chorus are huge, and Steve W gives us his darkest vocal performance, the multi-tracked voices mirroring the guitars really effectively.

The album closes with the mini-epic The Sorcerer, which again brings together a number of the key pieces of the Dead City Ruins offering into a single thunderous number.  The twin-guitars provide crushing, brutal riffs, with the heaviness of early Sabbath, the darker harmonies of Velvet Revolver, combined with the more modern Rival Sons, Kadavar or Clutch in the overall structure and feel of the songs.

What you realise is there is way much more to Aussie rock than AC/DC or Rose Tattoo, and the Dead City Ruins boys may have landed on a formula that will bring them international success, in Europe and the UK in particular.  This is a monster of an album!