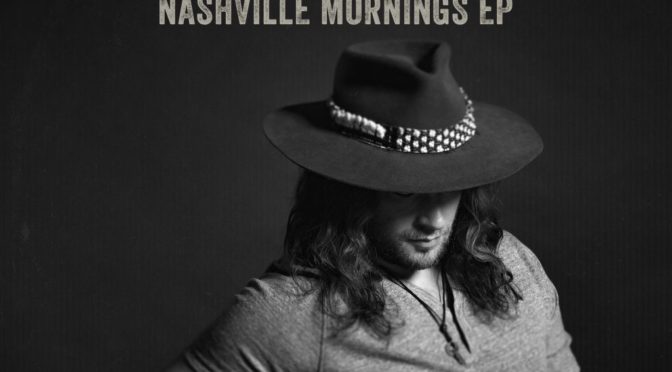 Mixing the twang of country music with the hard-hitting stomp of rock & roll, Canada’s Cory Marks made his debut with the July 2020 album Who I Am.

Full of autobiographical storytelling, guitar-driven anthems, party-drinking songs, and breakup ballads, the album is rooted in the influence of his hometown in Ontario.  Whenever he wasn’t drumming along to songs by Deep Purple, Ozzy Osbourne, and Rush, he was listening to his parents’ country records, developing a deep appreciation for outlaws like Waylon Jennings and Merle Haggard.

Cory Marks now releases his new EP Nashville Mornings, which offers retrospective new takes on some of the singer-songwriter’s fan-favorite tracks.  The track listing includes a new “country” mix of his last and anthemic single Blame It on the Double, a collaboration with Tyler Connolly of Theory of a Deadman, and great example of the modern hard-rock country genre, that was met with critical praise upon its release in April from the likes of Billboard and American Songwriter.  There is still enough grit and guitars in this to be a rock song rather than country, but it has been cleaned up a little!

Connolly also joins Marks, along with Jason Hook, in the cinematic visual for the track which premiered earlier this spring. The video includes footage from the upcoming horror-thriller film THE RETALIATORS (coming soon this year from Better Noise Films).  The track, lending itself to the anything-can-happen vibe of the underworld presented in the film’s story, will appear on its highly-anticipated original soundtrack, which also features some of the biggest names in rock, including Papa Roach, Five Finger Death Punch, Escape The Fate and more. Audiences will also be able to see Marks on screen in the feature, as he makes his acting debut via a very special cameo

Those two genres — classic country and amped-up rock — would eventually join forces in Marks’ own music, earning him a string of gigs with country heavyweights like Toby Keith and Brantley Gilbert, and a cracking single collaboration with Outlaws and Outsiders with Ivan Moody (5FDP), Travis Tritt and Mick Mars (Motley Crue).

Another collaboration on the album, although not really broadcast, is Out In The Rain, a glorious ballad that featured Lzzy Hale from Halestorm.  This time Cory gives it his solo treatment and we get a great example of his lazy but so smooth voice taking the lead and harmony lines.   Another of the tracks from Cory’s first EP is a hugely radio-friendly country rock smash in Better Off, and this one features some sizzling slide guitar all the way through the track, and the warmth of piano and keys to broaden the overall sound.  This is a cracker of a modern country rock song, and while this is a third release of the track, it really is a signature for Cory.

There is the wholly acoustic version of My Whiskey Your Wine from the album which is authentic, heartfelt and delivered with real grit and emotion, and then we get two live tracks in the album title track Who I Am, which really confirms what I had thought from Day 1, that this guy will be a terrific live performer with full-electric band, featuring some blistering guitar work on at least two different guitars, and while the attempts to bring him Down Under have been confounded to date, he is still on the Bill for VBM Fest 2021 in November up in Biloela!

Marks pays tribute to his music idol Merle Haggard with a stunning acoustic live cover of If I Could Only Fly, which was the title track of Haggard’s 50th album back in 2000 – written in 1979 by Blaze Foley – a beautiful sad ballad that contrasts wonderfully with the up-tempo rockers.

Marks recently announced that he will be joining “Blame It on the Double” collaborator Tyler Conolly and the rest of Theory of a Deadman on their North American tour starting in September. For tickets and show dates, please visit: http://www.corymarks.com/