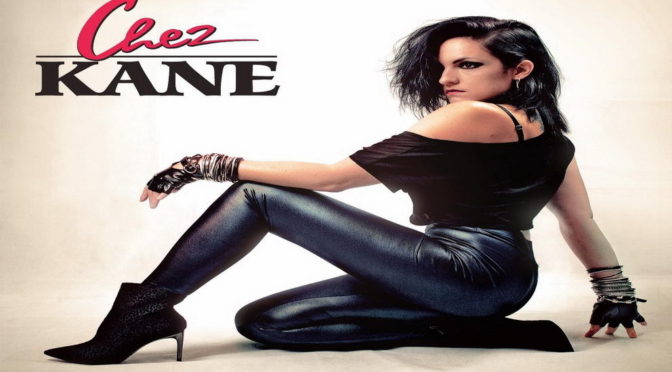 This is an undeniably 80’s melodic rock in the style of Alannah Myles, Fiona, Jenny Darren, Lee Aaron, Romeo’s Daughter and of course Vixen, with the sounds of Desmond Child abounding in the crisp riffs and catchy choruses throughout the album.  The album opens with the sort of keyboard intro Bon Jovi would be proud of, and Better Than Love is a radio-friendly slice of pop-rock, full of keyboards and sax solos that shows off a powerful voice, and lays down the standard for the tracks to follow.   All Of It cranks up the guitars and the vocals add some gravel to the purer tones to provide a harder edge to what is a belter of a rock song.

Rocket On The Radio, the second single release, has so many echoes of some of the best AOR of the 1980’s and 90’s from Blue Tears to Bad English, with a real feel-good top-down cruising vibe to it and just the smoothest production and cleanest rock guitars, twinned with some epic backing vocals behind Chez’s soaring lead vocals.  There is slightly poppy feel again to Get It On, with the synth beat under the riff, and the infectious backing vocals – this is summer AOR at its best, Chez really powers up the voice, and there is even one of those key changes we have forgotten used to be the standard.  Too Late For Love has the “Runaway” keyboards, jangling guitar riff, and an epic hook in the chorus, with a solid riff and rhythm track keeping the beat in check while Chez lets rip at the upper levels of her considerable range. There is a tasty little guitar solo in here too

There was always going to be at least one power ballad on an album like this, and Defender Of The Heart is the one – it has loads of energy from the backing band so never drops into the turgid as some have done, remaining upbeat throughout, which seems to suit the balance of the record which is hugely positive and dynamic, as well as being full of the passion driven from Chez’s huge voice.

There is no criticism in any comparison with Bon Jovi in Ball ‘N’ Chain with a trademark riff, massive hooks in the chorus, pre-chorus key change, and Woah Woahs and Nah Nahs to the excess! This could be the feel-good anthem of 2021!  The volume and distortion gets pushed up to 11 with Midnight Rendezvous blasting off the blocks with bass and drums laying down a solid foundation while the guitars and keyboards run amok over the top – and the voice just keeps setting new standards of power and intensity.  This is a belter of a rock song, and whoever developed this riff needs to get some extra credits.

We head back to the pure AOR with Die In The Name Of Love, again driven by the keyboards and a pounding drum beat, layers of vocals in the call and response sections in the pre-chorus and chorus, and again there is no real let up in the tempo, so even while the feel gets a bit lighter and poppier, the music keeps driving you along at a good pace, and this is really supported by the excellent production.

Album closer is another melodic rock gem, with wonderful segments of light and shade, passion in the verses and power in the chorus – Dead End Street delivers a superb full-stop to this top quality debut album, and there is more quality lead guitar work in here in the bridge section, and an ear-worm keyboard lick that keeps appearing.

While Chez Kane is almost certainly a child of the late 1990’s if not even the 2000’s, but she has delivered the female-fronted AOR album of the 1980’s to a whole new generation of melodic rock fans!  Great songs, huge vocals, glorious harmonies and vicious hooks, with top-quality musicians and production to top it off!