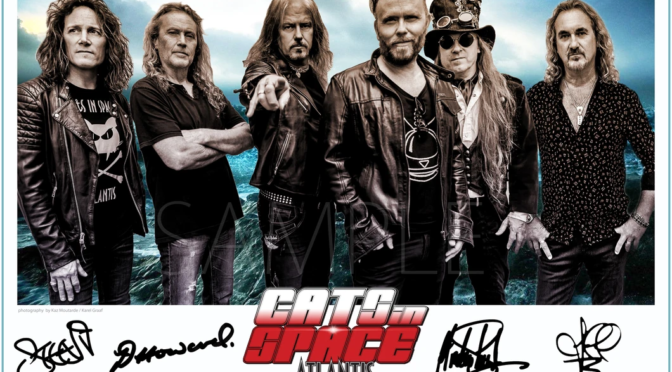 The brainchild of one Greg Hart and Steevi Bacon who formed the band in 2015, Cats In Space have just released their fifth album on the Harmony Factory label, through Cargo Records, titled Atlantis.

Both Greg (Guitars) and Steevi (Drums) have got something of a progressive / classic rock background, and they teamed up with songwriter Mick Wilson (10cc) to put a new, multi-faceted rock band together that puts a contemporary spin on some well-worn classic and prog-rock sounds and structures.

There is a new vocalist on the record, in Damien Edwards, previously fronting Jeff Wayne’s War Of The Worlds epic show, and his theatrical and broad range is ideally suited to the pomp and grandeur of the Cats In Space sound, which spans everything in a trans-Atlantic musical journey covering influences from Queen to Sweet, the Electric Light Orchestra, Deep Purple, Touch, Boston, with more than a sense of the 1980’s melodic AOR movement – full of huge orchestral harmonies, big guitars, keyboard overload and layers of backing vocals.  This is perhaps a well-trodden musical path, but Greg and the band manage to bring new life and energy to the sound throughout the record.

Opening up with the normal instrumental intro piece, Dive, which has an epic chugging riff and some wild guitar sounds over the top – think a classic Saxon riff topped by a Thin Lizzy guitar duel from Greg and Dean Howard, in collision with an orchestra!  Spaceship Superstar is a pomp rock throwback which is full of enthusiasm, and shows off Damien’s enormous voice.  The mid-section is all Styx / Kansas keyboards and guitars, with an overblown solo that soars from the speakers, giving credit to the immense production values across the whole record.

Revolution has the same feel, with a whopping drum intro from Steevi Bacon, a riff straight from the Andy Scott book of pop-rock chords, and the backing vocals are from the same space – although the lyrics are much more focused on 2020 and the political issues in the UK and USA.  This is a tight uptempo number, with some edgy discordant harmonies in both guitars and vocals which really give the track some added impact.

While the opening trio of songs do provide a high-energy jump-start to the album, and clearly show off the enormity of the overall sound and production, it is from Sunday Best and onwards where the sheer class of Greg Hart and Mick Wilson’s songwriting craftsmanship comes to the fore – yes there are sounds of the classic ELO and even 10cc in the melodies and chord progressions – and the guitar interplay through the solo is flawless. This is superbly clever melodic pop rock.  Listen To The Radio follows with another tasty riff and a wicked hook in the catchy chorus, which is pure high-end AOR that would not be put of place on one of those classic Journey albums – with Damien hitting some blissful high notes towards the end.

Current promo track is I Fell Out Of Love With Rock’n’Roll, which opens up in standard AOR ballad format with piano and vocals, before the orchestra kicks in, and then the band in full effect. This track covers everything from Queen through Pink Floyd to The Darkness and also has a downright musical feel that Jim Steinman would have been proud of!  The outro choral segment of “Yeah Yeah Yeahs” is something special, leading to the delicate pianissimo close.

Marionettes has a great lyrical theme, and the music is again firmly rooted in the 1980’s, but with some intriguing aspects, not least the high-speed mid-section with the spacey synthesiser solo from Andy Stewart, and the interlude before the pre-chorus kicks in, and then the 50 seconds or so of the outro – so many different elements to the structure here it is hard to know where the verse and chorus start and end!  Monster riffing opens up Queen Of The Neverland, and the way the voice and guitar follow each other through the verse is really effective – then the call and response of the chorus is a joy.

There is a sharp change of sound and pace in Magic Lovin’ Feeling that again takes a well-used formula and adds some glitz and glitter through the crisp beats, the cowbell and the mammoth wall of sound from the harmony vocals, with a variety of guitar sounds from the heaviest powerchords to intricate Neil Schon acoustic from Bad English.  This is a radio-friendly track with enormous commercial potential on both sides of the Atlantic – but maybe if we were still in 1989!

There is another monster ballad in Can’t Wait For Tomorrow which has a real 1970’s feel to the vocals and the harmonies, backed up by Jeff Brown’s touch on the bass and keyboards in particular.  Season’s Change has the synthesisers to the fore, and a prog-rock vocal style not unlike early Yes, that then morphs into a more upbeat pop-rock track, before reverting to the piano which leads us back into the chorus, which grows and grows into a pomp-tastic climax.

The album closes with the monumental epic of Atlantis which gives us yet more of all of the above, with a couple of nods to The Beatles in the background which are certainly not out of place – and there are many more superlatives due for all the interwoven musical parts which have already been noted before.

This is part musical theatre, part grandiose overblown pomp rock, part classic melodic rock and part progressive rock, all bound up with hugely commercial style, into this very different, but to those of us between 40 and 60 years old, wonderfully familiar genre, drawing from all corners of our musical back-catalogue.  Some people may hate it, but there is no denying the enormity of the achievement, and Atlantis has the production quality (also Greg Hart) and scale that the songs and sound deserve.

Video – I Fell Out Of Love With Rock ‘n’ Roll