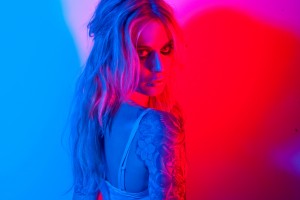 Gin Wigmore returns to our shores, kicking off her full band tour in Sydney on August 24, in support of her brand new album, ‘Gravel & Wine’. Wigmore spent months traveling alone through the Deep South of the United States, immersing herself in the musical religion of the Blues, and then heading to the Pacific Coast to write and record ‘Gravel & Wine’ with noted producer Butch Walker (Weezer, Pink, Panic! At the Disco, Katy Perry, Hot Hot Heat, etc)

Already a Top 10 Album on iTunes, ‘Gravel & Wine’ was inspired and informed by Wigmore’s love of spaghetti westerns, her respect of the blues, and the passion & pulse of rock ‘n’ roll. Her new found swagger and stage prowess will take you on a slightly darker musical journey this time round, she will lift you up and tear into your soul with her lyricism, all the while having you foot stomping and hand clapping in a haze of ballsy bliss.

No stranger to Australia, Gin has toured here with The Cardinals (of Ryan Adams fame), the impeccable Dan Sultan, and performed at some of Australia’s biggest festivals, including Homebake and Coaster. She was also MTV’s “Local Produce” Artist of the Month in June, and recently performed on Sunrise (Network Seven).

The album’s debut single ‘Black Sheep’ was released in Australia in April this year, scoring high rotation on Nova FM and it was the hero track on the Underbelly ‘Razor’ TV Promo’s. Internationally, ‘Black Sheep’ has also been heard on hit TV shows such as Grey’s Anatomy and Teen Wolf.

Gin’s music career kick started back in 2004 in NZ after being the youngest unsigned artist to win the International Songwriting Contest (USA). After moving to Australia in 2008 she was the first Artist to be signed with Island Records Australia (Universal).

Her debut Album ‘Holy Smoke’ won numerous awards including Best Pop Album and Album of the Year at the NZ Music Awards.

For more on Gin and to taste test her new Album, head to www.ginwigmore.com