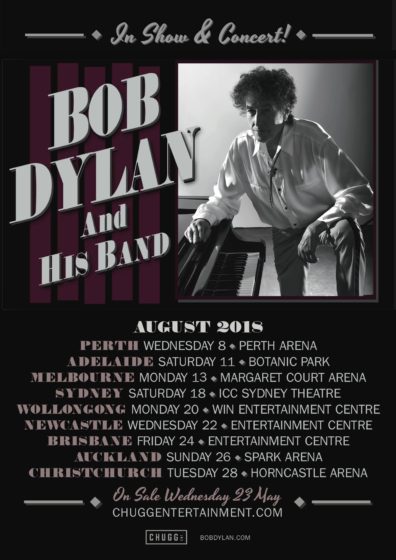 Chugg Entertainment has announced that, due to incredible demand, legendary music icon Bob Dylan has added a second Melbourne show to his Australian arena tour this August. The ‘voice of a generation’ will deliver back-to-back performances in Melbourne, taking in Margaret Court Arena on Monday 13th and Tuesday 14th August.

Chugg Entertainment is proud to announce that the legendary Bob Dylan will return to Australia this August for a string of arena shows. The cross-generational icon will take in capital cities across Australia, plus special one-off shows in Newcastle and Wollongong. See full tour dates below.

In a career spanning six decades, Bob Dylan’s impact on popular music and culture is immeasurable. He is responsible for some of the most influential albums of all time, including The Freewheelin’ Bob Dylan, Highway 61 Revisited and Blonde on Blonde, and his socially and politically charged singles, ‘Blowin’ In The Wind’ and ‘The Times They Are A-Changin’’, are widely considered among the most important songs in modern music. The ‘voice of a generation’ boasts an unparalleled repertoire, including timeless classics, ‘Like A Rolling Stone’, ‘Tangled Up In Blue’, ‘Knockin’ On Heaven’s Door’ and ‘Girl From The North Country’.

With a catalogue of more than 50 albums, Dylan has sold more than 100 million records globally, received 11 Grammy Awards, an Academy Award for ‘Things Have Changed’ (Best Original Song), and has been inducted into both the Rock and Roll Hall of Fame and the Songwriters Hall of Fame. In 2012, he received the Presidential Medal of Freedom from President Barack Obama, and in 2016, was awarded the Nobel Prize in Literature.

Last in Australia for a month-long run of sold-out theatre shows in 2014, Bob Dylan and his band are a commanding force on stage. “There’s no doubt that seeing Bob Dylan brilliantly on song is a near spiritual experience”, the Sydney Morning Herald noted of his most recent Australian shows, while The Guardian declared, “the band were at one with Dylan – you’d swear they could play a fade-out if he wanted them to”.

To experience Bob Dylan live in concert is an opportunity to share an encounter with one of the last remaining musical legends of the modern era. Don’t miss out on what promises be a performance for the ages.

TICKETS ON SALE WEDNESDAY 23RD MAY, 9AM LOCAL TIME

For more information go to: