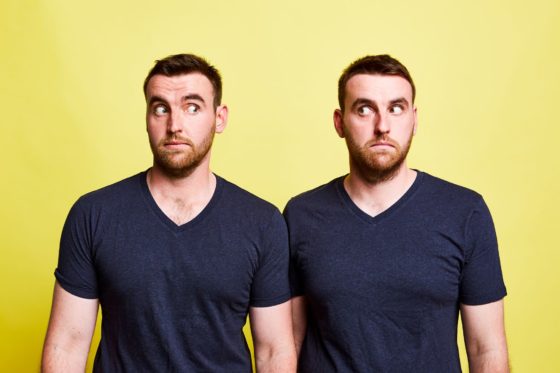 Listed as one of the Top Five Acts at 2017’s Falls Festival by the Herald Sun, nominated for a third year for Best Comedy at Perth Fringe World with sell out shows in Perth and Melbourne Comedy Festival and after recording their first live DVD at the iconic Sydney Comedy Store, the Stevenson Experience take on the country with a national tour THE STEVENSON EXPIERIENCE: SPOT THE DIFFERENCE staring in Perth in February with new songs, new jokes… same rivalries. Because this time, it’s personal.

Who are we kidding? It’s always personal.

Australia’s only identical twin musical comedy duo, The Stevenson Experience are two of the country’s fasting rising comedians. Their hilarious songs have seen them sell out at every major festival in Australia, collect 5 star reviews and win awards.

Their unique blend of sibling rivalry and musical prowess results in a high energy hour of musical hilarity.

SPOT THE DIFFERENCE is the seventh festival show from The Stevenson Experience and will be jam-packed with all the antics that they have become renowned for over the years: highly skilled piano playing from Benjamin, less skilled guitar playing from James, uproarious audience interaction, competitive and infectious sibling rivalry, rapping, red-hot dance moves, scathingly clever lyrics, creative twinsults, and a metric tonne of laughter.

“Fun, witty, politically incorrect, lewd, and shamelessly hilarious […] These two guys are the next generation for musical comedy in Australia.” ★★★★★ Melbourne Arts and Fashion

Check out more from the boys on Facebook: facebook.com/TheStevensonExperience