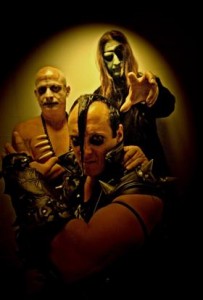 1977, the dawn of punk, the Misfits were born. This year, over three decades later, they descend on Australia, with a legacy of musical history that has withstood the test of time.

The Misfits hit up Sydney, Brisbane, Melbourne and Adelaide in November / December 2011.

From inception, the Misfits were primal. Their music was aggressive, confrontational and dangerous with violent lyrics, coupled with timeless vocal melodies bred from 1950’s rock and roll. Immortalizing black and white horror films in their music, the Misfits developed a ghoulish and totally unique persona. It was the early days of anarchy and they had created a rebellion all of their own.

The Misfits have endured hardcore’s heyday as punk rock’s monster squad, a band whose cult following – a coven known as the Fiend Club – inspired them to continue to write, record and tour. Influential rock peers Guns ‘n Roses, Metallica, My Chemical Romance, Hatebreed, NoFX and Sick Of It All, are amongst some who have offered musical tributes in ode to the Misfits.

It is the Misfits’ all-encompassing and fierce DIY mentality that continues to drive their efforts. They craft their own instruments – from their guitars, amps and drums – down to the studded leather and jackets, and their own elaborate stage sets. Highly collectible and sought after memorabilia featuring the iconic “Fiend Skull” has appeared in films and on television and continues to be worn publicly by actors, musicians and athletes. The impact of the Misfits and their music on pop culture has become a phenomenon in and of itself.

Today, they remain more topical and more sought after than ever before. After a split with former singer Glenn Danzig in the mid 1980’s and a decade-long legal battle, the band are now fronted by founding member Jerry Only (Bass/Vocals) with former Black Flag alum Dez Cadena on guitar, and Eric ‘El Chupacabra’ Arce (formally of Murphy’s Law) behind the kit. The Misfits continue to sell out shows and draw thousands of fans night after night around the globe.

One thing is certain, The Misfits are here to stay and once again, every day is Halloween.