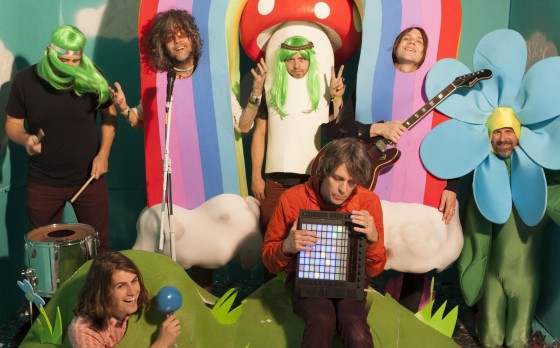 The Flaming Lips have taken some time out of their intense schedule this week, that has seen them busily planning a naked, milk soaked show, with pop phenomenon Miley Cyrus, to announce a one off headline show in Melbourne at the Palais Theatre Friday January 8 2016

The Flaming Lips, headed up by enigmatic front-man Wayne Coyne, are no strangers to Australia; their most recent trip was in 2012/13 to headline Falls Festival and Southbound. Undoubtedly a festival favourite, they have headlined a number of major music festivals in Australia such as Splendour In The Grass, Big Day Out and Harvest, plus a string of major international festivals including Iceland Airwaves, Coachella, Lollapolooza, Firefly, Primavera Sound, Sasquatch! and Hopscotch, to name a few.

Acclaimed for their eccentricity and ostentatiousness, The Flaming Lips’ live stage shows include confetti cannons, yetis, aliens, animals as back-up dancers, a glowing neon vagina and of course, Coyne’s signature ‘space-bubble’ crowd-surfing performance. In 2002 Q Magazine named them one of the “50 Bands to See Before You Die”.

Rolling Stone declared of their 2014 Iceland Airwaves performance “The Lips prize audience participation in a way many bands promise but few deliver… Coyne took his traditional see-through-sphere ride beyond the stage, rolling across a tide of hands to the back, and donned a billowing, silver cape… The foil was rolled out through the audience which grasped and shook it, creating a turbulent sea of shimmer in front of Coyne, who was literally in it up to his neck, singing like an excited, disembodied pharoah.”

Best known for their hit singles ‘Do You Realize??’ and ‘She Don’t Use Jelly’, The Flaming Lips have released more than 16 albums including acclaimed ‘Yoshimi Battles The Pink Robots’ (2001) and ’Embryonic’ (2009) and have collaborated with innovative artists from Nick Cave, Yoko Ono, Henry Rollins, Peaches, Edward Sharpe & The Magnetic Zeros, Sean Lennon, and Erykah Badu to the recent 2015 MTV Video Music Awards performance with close friend Miley Cyrus.

The group’s latest studio album is 2014’s With a Little Help from My Fwends, which is a track-for-track tribute to The Beatles’ album Sgt. Pepper’s Lonely Hearts Club Band. Prior to that, The Flaming Lips’ latest all-original album is 2013’s The Terror.

Don’t miss your chance to catch The Flaming Lips’ only Australian headline show at the iconic Palais Theatre, Friday January 8, 2016.