The trend towards digital has prevailed over the last three years; digital tracks selling 24.9 million units in 2008 compared with nearly 50 million in 2010 and the value of digital albums more than doubling over the same three year period. From 2009 to 2010, digital tracks have increased in value by 47% and digital albums by 45%.
END_OF_DOCUMENT_TOKEN_TO_BE_REPLACED

END_OF_DOCUMENT_TOKEN_TO_BE_REPLACED 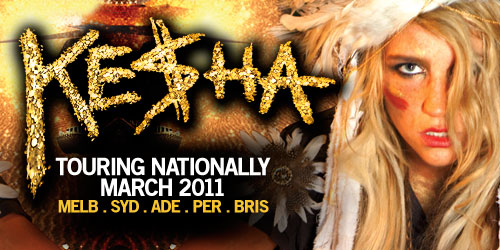 Touching down for a week-long promo tour in Sydney yesterday, Ke$ha’s visit is perfectly timed for this exciting announcement! On top of some special appearances in support of the forthcoming Animal + Cannibal double CD due for release November 19, Ke$ha is sure to have the paparazzi and fans alike in a frenzy as she hits the harbour city’s shops, restaurants and hot spots.
END_OF_DOCUMENT_TOKEN_TO_BE_REPLACED