‘Post-rock’ is a tired term – in fact, so tired it’s lost its meaning since the genre’s noughties heyday. This writer has long discovered that instrumental rock music doesn’t need to come with a ‘post-‘ or ‘math-‘ prefix attached to it in order to sound good; in the end, it either does or it doesn’t. It has now been 15 years since Explosions In The Sky first showed us how delicate instrumental rock can be and before that, Slint and Tortoise did the same for a mix of tricky time signatures and sparse guitar atmospherics.
END_OF_DOCUMENT_TOKEN_TO_BE_REPLACED 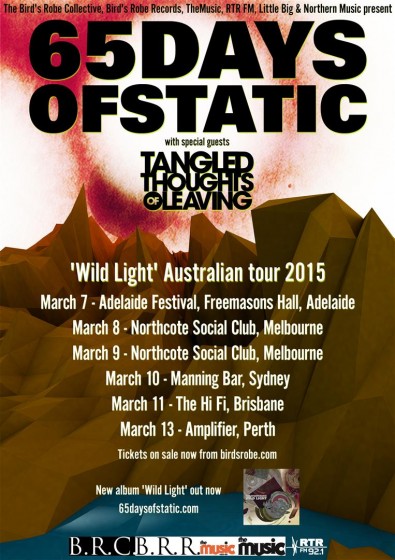 Formed in 2001 in Sheffield, 65daysofstatic quickly established themselves as one of the most influential post-rock exponents in the UK. The success of their early records earned the band a personal invitation to support The Cure on their 2007-09 arena tour around the world, playing to hundreds of thousands of people.
END_OF_DOCUMENT_TOKEN_TO_BE_REPLACED Fresh from a huge 2012, including an ARIA award nomination, Sydney’s sleepmakeswaves were tasked with the role of main support for the entire tour. The quartet has, over the last few years, grown their fan base quite significantly and it showed in the sheer volume of the crowd’s cheers on Friday night as the band wandered on stage. The highlights of the set were opener ‘To You They Are Birds…’ and ‘We Sing The Body Electric,’ displaying exactly why they are considered one of Australia’s best young bands. To the delight of many, the band also showcased a couple of new tracks in ‘Avalanches’ and ‘Freshmaker.’ The former was particularly impressive, being slighter faster paced compared to most sleepmakeswaves tracks whilst still retaining their original sound.
END_OF_DOCUMENT_TOKEN_TO_BE_REPLACED