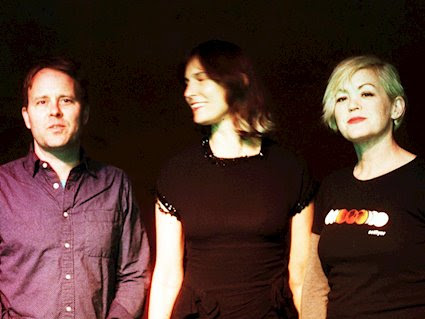 Schoolkids Records has announced they will release the new Slowness album, entitled ‘Berths’. Ahead of their new long-play, which will be released in June, they present the single ‘Rose’.

As for all Slowness releases, this new album was produced by Monte Vallier (Weekend, The Soft Moon, Wax Idols). Side A was engineered by Dave Voigt (Luna, John Cale, Yo La Tengo, Alex Chilton) at his Beyond Notes studio in Brooklyn. Side B was done with Vallier at Ruminator Audio in San Francisco.

This release follows up their 2014 album ‘How to Keep from Falling off a Mountain’ and 2013 album ‘For Those Who Wish to See the Glass Half Full’.

Slowness runs mostly mid-tempo, sometimes fast and occasionally slow. As for this new record, it is purposefully slow, sounding like a hybrid between classic Slowdive, early-Cure and mid-period Neil Young. Often labelled shoegaze or dreampop with elements of slowcore, psych rock and even Krautrock, this music is perhaps best referred to as drone-pop. Imagine Spacemen 3 teaming up with Murmur-era R.E.M. with female harmonies.

“This is a very personal record. It’s taken a while to make for several reasons. When we started recording during the summer of 2014, we knew wanted a slower, heavier record to reflect the current American grain,” says Geoffrey Scott.

“We tend to think everything’s gone bad since the last election and sometimes forget that that election was 30 years in the making. So we set out to capture that, but then the whole concept probably took a turn when Julie and I decided to end our 11-year relationship as a couple. So the political became blurred with the personal, and the lyrics probably reflect that. In fact, all three members of Slowness were going through a major breakup during the making of this record.”

Formed in 2008 in San Francisco, Julie Lynn and Geoffrey Scott started recording demos, crossing and tripping over wires from the pod to the four track recorder. In 2009, they enlisted Erik Karl on drums to help turn those demos into the songs that would become their 2011 debut EP ‘Hopeless but Otherwise’.

Eventually Lynn and Scott were joined by drummer Christy Davis, who has been playing for over 30 years with a wide variety of NYC artists, including Beastie Boy Adam Horovitz, downtown avant garde artist Rebecca Moore, and political activist Reverend Billy.

“Christy’s drumming helped change our sound significantly. She helped open everything up. With her we were able to record these songs as live, single takes more than we ever have before. This made Monte happy when it came to both recording and mixing, not because it made his life easier, but because he thought it served the music better,” says Julie Lynn.

‘Rose’ will be released on April 3 and will be available across online stores like iTunes and streaming platforms like Spotify, as well as on vinyl. The full ‘Berths’ album will follow in early June.