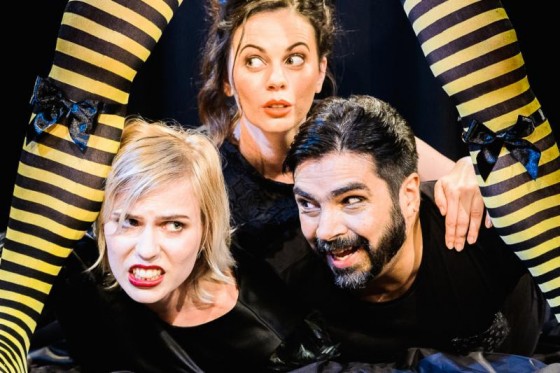 One of Shakespeare’s best loved plays, the riotous TWELFTH NIGHT follows the adventures of Viola, a woman of noble birth who finds herself washed up on the shores of Illyria after a shipwreck. Viola disguises herself as a man to find employment and goes to work for the lovesick Duke Orsino. Orsino immediately sets Viola the task of wooing the Countess Olivia, a nearby lady deep in mourning for her deceased brother. No sooner has Viola become Orsino’s love messenger than she finds herself falling in love with him, while Olivia, believing Viola to be a man, finds herself falling head over heels for the resourceful go-between. Meanwhile, Olivia’s housekeeper Maria, determined not to become an old maid, abandons the gloom of her mistress’ house for the bright underworld of perpetual party-animal, Sir Toby Belch. Together they devise a scheme to bring down Olivia’s haughty, killjoy butler Malvolio once and for all, unleashing a riotous chain of chaos, confusion and obsession.

Directed by QSE Artisitc Director, Rob Pensalfini (nominated for a Best Director Matilda Award for QSE’s 2013 hit A Midsummer Night’s Dream) and set in the beautiful Roma Street Parkland ( the world’s largest sub tropical garden in a city center), QSE’s TWELFTH NIGHT will whisk you away to a world where disorder triumphs, rebellion is in season and everything is turned gleefully on its head. Featuring more music than any other Shakespeare play, which in typical QSE style will be performed live by the cast, QSE’s TWELFTH NIGHT is sure to be the hottest Shakespeare party of the year.

Colin Smith, who starred in QTC’s Black Diggers and was also nominated for a Best Supporting Actor Matilda Award for his work in last year’s QTC production of The Odd Couple, returns to the QSE stage as Malvolio, and Silvan Rus (nominated for Best Supporting Actor for playing Aaron in last year’s TITUS) will play Viola’s twin brother Sebastian. As well as directing, Rob Pensalfini will also perform the role of Feste, the depressed fool who has long since lost his taste for fooling, adding to his growing resume of critically celebrated roles which includes Titus Andronicus, Shylock, Richard 3 and Prospero.

The Tempest was described as ‘masterful’ and TWELFTH NIGHT, a rollicking exploration of obsession like no other, promises to be no different.

‘Titus Andronicus, as performed by the Queensland Shakespeare Ensemble is one of the most engaging pieces of theatre, let alone Shakespeare I have seen for quite some time. Its pace was fast, energy good and the text was interpreted in such a way as to bring new life to words written all those centuries ago that made them seem fresh and newly written.. Defintely a piece worth seeing’ – Eric Scott, Absolute Theatre

“Titus” is a gripping production, well worth seeing for those looking for some Roma Street Parkland revenge. QSE is to be commended for daring to take on Shakespeare’s bloodiest and most violent work and showing audiences that there is more to the Bard’s tragedies than tales of youthful woe. Clearly, it not only respects the work but deserves to have audiences flocking to see how they do Shakespeare… properly.’ -Meredith Walker, Blue Curtains