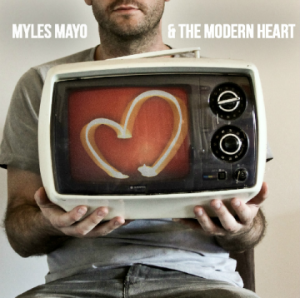 “A Love like a Crucifix” is the first taste of Myles’ second solo album, Myles Mayo & the Modern Heart, out 18 October 2013. Certainly not backward in coming forward, A Love like a Crucifix has been injected with a playful dose of cynicism and a sound that signifies a departure from that of his debut album. Carefully pieced together in his home studio in Adelaide with many friends from right across the country, the forthcoming, self-produced long player has been given much love. A Love like a Crucifix is just one of the many infectious tunes on this fine record.

The first single from Myles’ first album, “How you done me Wrong”, was selected as iTunes Single of the Week and spent much of the next year spinning on rotation at various national radio stations. He signed a three album deal with Mushroom Publishing. His debut album was released via Other Tongues mid-2011 and he toured nationally many times sharing the stage with artists like Micah P Hinson (USA), Eskimo Joe, The Cat Empire, Clare Bowditch, Tim Rogers, Owl Eyes, Strange Talk, Loon Lake and loads of others, playing at many sold out venues around the country.