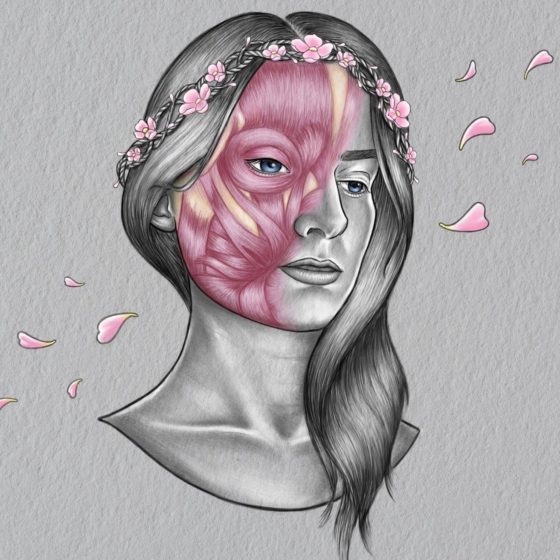 Louise Marshall is an alternative indie artist based in Adelaide, South Australia. Louise had begun her music journey at fifteen, song-writing obsessively. Not longer after she took up the guitar, further developing an appreciation for experimental rock, pop and alternative indie.

Juvenile is Louise’s first studio EP, released in November 2017. Ocean is the featured single from the EP. Juvenile is an EP that explores experiences that had personal effects on Louise, while pondering the idea of ‘what if’. The EP was written during Louise’s emotional dark age. Juvenile was was mixed, mastered and produced by Cezary Konarski of Datafire Audio.

Featured single Ocean was written during a time of experiencing a depression and self destruction, the song was about being in the trenches of helplessness. The use of body parts ‘veins’ and references to ‘mad house and ‘ is it fine to be me’ are nightmarish references linked to the reality Louise was experiencing at the time. The use of synth pads and strings combined, gives a calming and haunting mood. The chorus is anticlimactic and doesn’t lift the songs tone. It relies on nothing, just the reminder of Louise’s experience.

The creation of the music vide for Ocean was made possible with the help of MadeAdelaide film production. MadeAdelaide held the script of Ocean as a high priority, capturing it’s meaning’s and concept. The video for Ocean presents the dark, subconscious elements of Louise’s mind. This is portrayed through the unsettling extras and powerful symbolism of vulnerability and power struggles. The video presents below the surface issues and how these issues can manifests themselves in life.

Each song has a unique sound but carries the same dark tone and signifies a transition to eventually accepting the current state. Blue is vocally dominate and contains a mourning feeling. The Beast holds a sense of anticipation from transitions to the chorus and verse. Dignity is a simple song, primarily a ‘what if’ song. Dignity is about feeling helpless and was inspired by an aged care facility. Ocean was is the most emotional track on the EP. Ocean is about seeing the dark and bare parts of the mind and releasing the fear of it. Chlorine is the last track of the EP and is the lightest. Chlorine is the completion song that gives birth to new ideas and removes the cold callous perspective of perceiving life.

Juvenile was influenced from bands such as Radiohead, Florence and the Machine, Massive attack and Grimes. Louise currently song-writes and experiments with different music styles to broaden her creativity, with aims to release more music in the future.

For Fans Of: Florence and the Machine | Massive attack

‘Ocean’ by Louise Marshall is out now on all good digital stores.