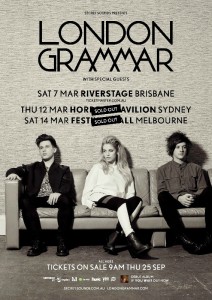 erth International Arts Festival are excited to announce London Grammar will be returning to Western Australia to play Redhill Auditorium on March 5 as part of the 2015 program. Returning to the West for the first time since their stunning performance at South Bound Festival, the announcement will be welcome news for WA fans.

Joining London Grammar for all shows will be New York minimal pop three piece Wet. The talk of SXSW this year, Wet, came to prominence late 2013 with breakthrough single ‘Dreams’ – a track readily added to full rotation on triple j and boasting in excess of 300,000 plays online. Their second single ‘You’re The Best’ proved a worthy successor; showcasing the indie pop smarts and minimalist R&B that saw the band publicly lauded by the likes of NME (“beguiling”), Billboard (“the toast of the tastemakers”) and BBC Radio 1 (“understated, considered and beautiful”).

Ivor Novello Award winners London Grammar were forced to postpone their Splendour In The Grass side shows earlier this year due to illness. Their rescheduled dates in Sydney and Melbourne sold out instantly, and the trio have just announced a Brisbane show, at the stunning Riverstage, to give all of the Northern New South Wales and Queensland fans who missed out on their Splendour set, a chance to see them live.

Their first trip to Australia in 2013 became a highlight of each of the Falls Festivals and Southbound, resulting in an ever expanding fan base, stellar reviews and a breath taking recording for triple J’s Live At The Wireless, you can get a taste of it here.

“I must have seen 100 gigs at this venue over the past 25 years, from the La’s to Beastie Boys, but can’t recall an atmosphere quite like tonight’s.” The Guardian

” this trio already functions like a well-oiled machine, and they’ve produced a stylish debut that demonstrates both their immense talent and impressive instincts.” Pitchfork 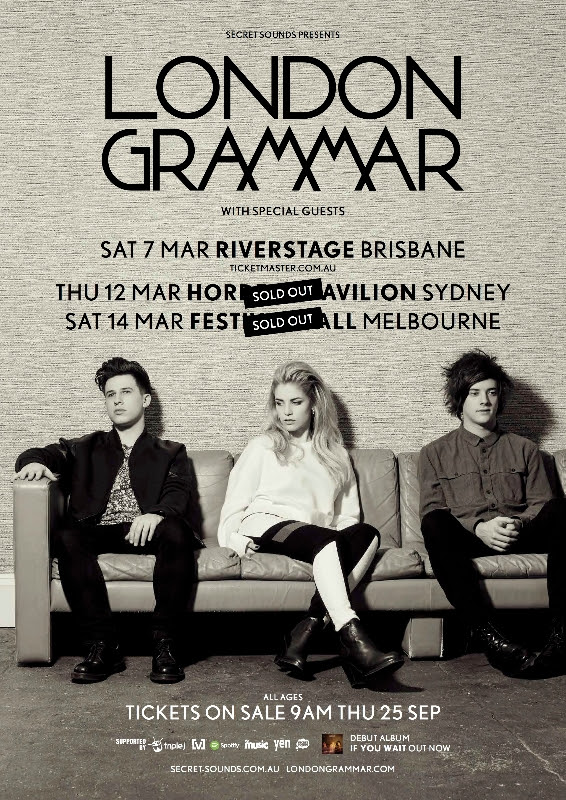