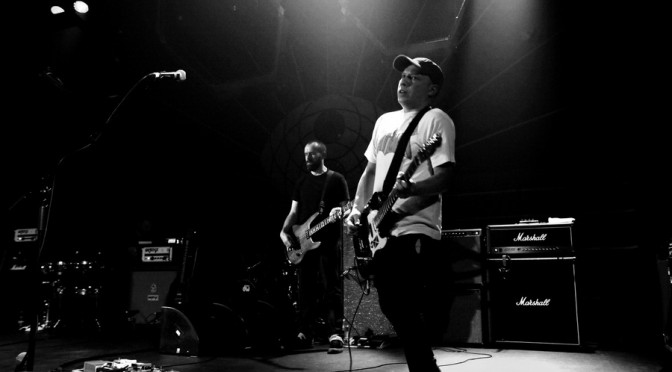 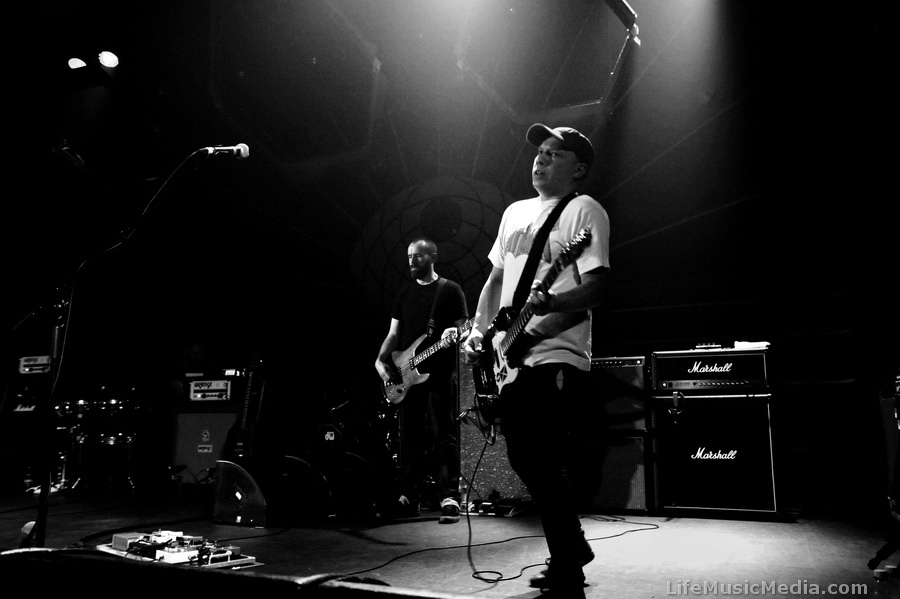 Mick Turner spends 40 minutes creating slow-moving, somnolent guitar figures interspersed with distorted drags of cello bow, while a Jim White sound-a-like softly layers staccato drum patterns underneath. It’s a “solo” mode that could almost be The Dirty Three on benzos, but if so it shows that D3 is much more than the madcap antics of Warren Ellis.

Mogwai has eight studio albums under its belt now. It’s the sort of longevity that adds friction live: inevitably something must give way.

The surprise isn’t so much the presence of Rave Tapes highlights like “Heard About You Last Night” or “Deesh”, nor the absence of heavy hitters such as “Like Herod” or “Glasgow Mega-Snake”. Instead it’s that, touring Rave Tapes, Mogwai’s main set emulates the newest releases relative introspection, mostly eschewing claustrophobic dynamics in favour of gentler build-ups and a vast, open sound.

It works beautifully. On tracks such as “Heard About You Last Night”, “I’m Jim Morrison I’m Dead”, Hunted By A Freak, and 2 Rights Make 1 Wrong, Mogwai is crystalline and remote in a way I’ve never experienced: like sitting in a field staring up at the Milky Way. And even when the sound closes in, such as on Ten Rapid’s Ithica 27 ø 9 or Rano Pano, the effect is often gradual, or momentary, rather than an unrelenting vice of pure noise.

The inclusion of “Teenage Exorcists” from Music Industry 3. Fitness Industry 1. provides another unusual moment, with Stuart Braithwaite’s clear vocals harking back to some of the band’s earliest output.

Rave Tapes’ “Remurdered” perhaps offers the night’s most compelling moment: as the Casio-like tick-tick of Martin Bulloch’s high-hat is joined by the thump of the tom drums and then Barry Burns’ heaving, groaning synth riff kicks in at around the three-minute mark. The layering is subtle; the groove delicious and addictive as each part warps around the whole.

Still, Mogwai wouldn’t be complete without those crushing episodes of pure sound and the Glasgow post-rockers pump out three in a row to close out the evening.

“Mogwai Fear Satan” hits in a disorienting hurricane of squalling guitars and strobing lights to end the main set before the band returns almost immediately and launches into Mr Beast opener “Auto Rock”. Finally, guitars to the fore, the band finish with an immense rendition of “Batcat” that prompts isolated moshing while Braithwaite sports an ear-to-ear grin.

Maybe a softer, gentler Mogwai beckons for the future. But even so, it seems they’ll never completely neglect their noisy past. And that’s all to the good.