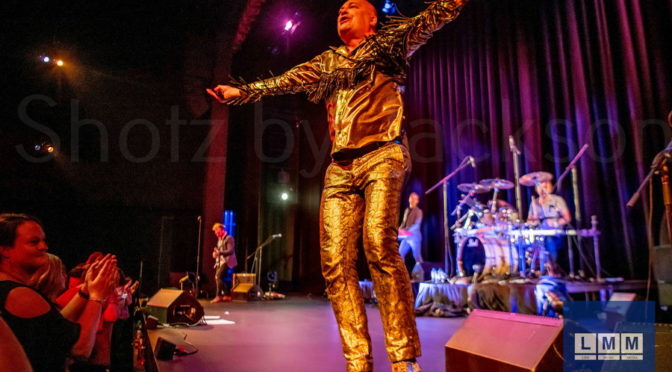 You could travel the lengths and depths of this wonderful country and not find a better performer to take on the role of queen for one night. Adam Thompson, front man of 90’s pub band Chocolate Starfish metamorphosed his vibrant persona to take on the great man Freddy Mercury playing the Bohemian Rhapsody Soundtrack in full on Saturday night. The 600 plus crowd sang and danced the night away as Thompson put his own take on well worn Queen classics. Joined by a 5 piece band Thompson played two energetic sets leaving nothing behind to a very appreciative audience.

Having watched Thompson live a numbers of times over the past 3 years this artist is one of only a handful in the current climate that can extract maximum participation from the paying audience. This is achieved by giving 110 percent to every performance. Thompsons ability to engage and embrace the paying public should not be under estimated, you can’t help leaving the venue with a smile on your face. Working his way though the setlist Thompson’s personality attracts transforming even the most placid audience member to rise and join into the fun. As for the band, they were every bit into the groove and provided constant presence next to Thompson at the front of the stage.

Playing an encore highlighting Queens classic Live Aid performance from 1985 including ‘Radio Ga-Ga’, ‘Hammer to Fall’, ’Somebody to Love’ and ‘We Are The Champions’ and to finish with ‘Bohemian Rhapsody’

If you have a chance to catch this tour you will not be disappointed, make sure you bring your singing voice as you will be drawn in almost immediately and have the time of your life.

Setlist (not in performing order)