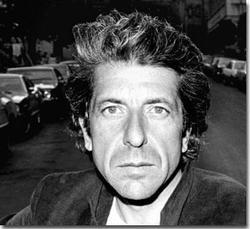 Part of the reason why Cohen’s early work revealed such a high degree of achievement is that he was an accomplished literary figure before he ever began to record. His collections of poetry, including Let Us Compare Mythologies (1956) and Flowers for Hitler (1964), and his novels, including Beautiful Losers (1966), had already brought him considerable recognition in his native Canada. His dual careers in music and literature have continued feeding each other over the decades – his songs revealing a literary quality rare in the world of popular music, and his poetry and prose informed by a rich musicality.

One of the most revered figures of the singer-songwriter movement of the late Sixties and early Seventies, Cohen soon developed a desire to move beyond the folk trappings of that genre. By temperament and approach, he had always been closer to the European art song – he once termed his work the “European blues.” Add to that a fondness for country music; an ear for R&B-styled female background vocals; a sly appreciation for cabaret jazz, and a regard for rhythm not often encountered in singer-songwriters, and the extent of Cohen’s musical palette becomes clear. Each of Cohen’s albums reflects not simply the issues that are on his mind as a writer, but the sonic landscape he wishes to explore as well. The through-lines in his work, of course, his voice and lyrics, as distinctive as any in the world of music.

Cohen’s 1974 album, New Skin for the Old Ceremony, which includes “Chelsea Hotel #2,” a candid memoir of his early years in New York City, found him making bolder use of orchestration, a contrast to the more stripped-down sound he hard earlier preferred. Death of a Ladies’ Man, his 1977 collaboration with Phil Spector, constitutes his most extreme experiment. Spector’s Wagnerian Wall of Sound proved an uncomfortable setting for Cohen’s typically elliptical and almost painfully intimate lyrics (terms that, admittedly, would not apply to “Don’t Go Home With Your Hard-On,” on which Bob Dylan and Allen Ginsberg provide backing vocals). Over the years, Cohen has bitterly complained about Spector’s high-handed – and gun-wielding – ways, while occasionally expressing a kind of grudging affection for the album’s uncharacteristic excesses.

Recent Songs (1979) and Various Positions (1984) returned Cohen to more recognizable sonic terrain, though the latter album, in a perhaps misguided nod to the trend at the time of its release, prominently incorporated synthesizers. Though not initially released in the U.S., Various Positions includes “Hallelujah,” which has since become one of Cohen’s best-known, best-loved and most frequently covered songs. (Versions by Jeff Buckley and John Cale are especially notable.)

As the Eighties and their garishness began to wane, Cohen’s star began to rise once again. The listeners that had grown up with him had reached an age at which they wanted to re-examine the music of their past, and a new generation of artists and fans discovered him, attracted by the dignity, ambition and sheer quality of his songs.

Cohen rose to the opportunity this audience represented by releasing two consecutive albums, I’m Your Man (1988) and The Future (1992), that not only rank among the finest of his career, but that perfectly capture the texture of particularly complicated times. Cohen had long documented the high rate of casualties in the love wars, so the profound anxieties generated by the AIDS crisis were no news to him. Songs like “Ain’t No Cure for Love,” the wryly titled “I’m Your Man” and, most explicitly, “Everybody Knows” (“Everybody knows that the Plague is coming/Everybody knows that it’s moving fast/Everybody knows that the naked man and woman – just a shining artifact of the past”) depict Cohen surveying the contemporary erotic battleground and reporting on it with characteristic perspective, insight and wisdom.

Similarly, in the title track of The Future, Cohen ironically describes himself as “the little Jew who wrote the Bible,” and his immersion in Jewish culture, obsession with Christian imagery, and deep commitment to Buddhist detachment rendered him an ideal commentator on the approaching millennium and the apocalyptic fears it generated. Along with the album’s title track, “Waiting for the Miracle,” “Closing Time,” “Anthem” and “Democracy” limned a cultural landscape rippling with dread, but yearning for hope. “There is a crack in everything,” Cohen sings in “Anthem,” “That’s how the light gets in.” Our human imperfections, he seems to be saying, are finally what will bring us whatever transcendence we can attain. 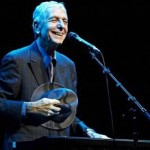 Since that time, Cohen has released Ten New Songs (2001) and Dear Heather (2004), as well as Blue Alert (2006), a collaboration on which Cohen produced and co-wrote songs with his former background singer Anjani Thomas, who provides the vocals. All three albums have only solidified his place in the pantheon of contemporary songwriters. At 72, Cohen continues to produce compelling work, while enjoying the honors that deservedly come to artists who have achieved his legendary status. Documentaries, awards, tribute albums and the ongoing march of artists eager to record his songs all acknowledge the peerless contribution Cohen has made to what one of his titles aptly calls “The Tower of Song.”

Leonard Cohen woes fans at Brisbane Entertainment Centre
The Courier-Mail – February 3, 2009 by Noel Mengel (Photo: Marc Robertson)
THE word “legend” is flung around too liberally in the world of modern music, no doubt too liberally for the liking of Leonard Cohen, a man whose crisp and elegant way with words has been winning fans – and helping heal wounded hearts – for more than 40 years….. full review here!
———————————-

The Canadian poet, philosopher, novelist, musician, singer and songwriter’s skill, thrill and goodwill reverberated around the auditorium as he proved age has not wearied his prowess or his intensity. “It’s been a long time, about 15 years since I was on stage when I was 60, a young kid with a crazy dream,” he joked….. Read the full review here!

————
Blog – Another Lost Shark – “Review: Leonard Cohen live at Brisbane Entertainment Centre”
At 74 years of age, Cohen is still a man working for our smile. Last night there were more than ten thousand of them looking back at him. It was a joyous transaction… Read the full review here
—————–

Dance Me To The End Of Love
The Future
Ain’t No Cure For Love
Bird On The Wire
Everybody Knows
In My Secret Life
Who By Fire
Chelsea Hotel
Hey, That’s No Way To Say Goodbye
Sisters Of Mercy
Anthem

So Long, Marianne
First We Take Manhattan
Famous Blue Raincoat
If It Be Your Will
Democracy
I Tried to Leave You
Whither Thou Goest
…. Reference source