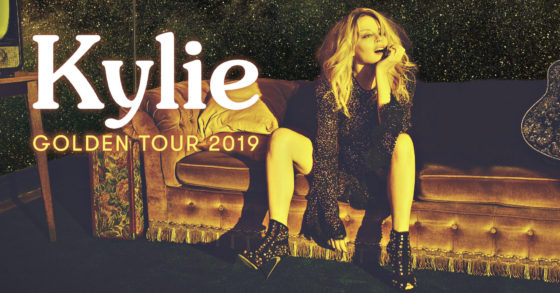 Frontier Touring is thrilled to announce that iconic Australian pop princess Kylie Minogue will bring her Golden Tour to Australia, performing a string of headline shows at arenas and outdoor venues across the country next March.

The Golden Tour marks Kylie’s first shows since 2015’s Kiss Me Once Tour. Cementing her reputation for a unique and captivating live show, each performance on the Golden Tour is a narrative connecting all Kylie’s hits into one glorious story.

‘Quite frankly, she was breath-taking… this woman is the epitome of what hard work and giving the fans what they want can get you.’ – Metro

With an incredible 30 years in the music industry and 14 studio albums to her name, Kylie has dominated the music charts with five #1 albums in both Australia and the UK, 16 ARIA Awards and an induction into the ARIA Hall of Fame in 2011.

Kylie’s most recent release, the Nashville-recorded and country-influenced album Golden (out now via Liberator Music/BMG), debuted at #1 on the ARIA and UK Charts, featuring tracks such as ‘Golden’, ‘Music’s Too Sad Without You’ (feat. Jack Savoretti), ‘A Lifetime To Repair’ and her latest single ‘Sincerely Yours’. The result of an intensive working trip to the home of country music, Kylie worked alongside key writers Steve McEwan and Amy Wadge with producer Sky Adams. The result was an outstanding personal album that blends Kylie’s signature pop style with a Tennessee influence; this exciting change of style is sure to enchant audiences next March when performed live.

Tracks from Golden such as ‘Dancing’ and ‘Stop Me From Falling’ fit seamlessly in the tour setlist alongside Kylie’s endless pop classics including ‘Can’t Get You Out of My Head’, ‘Spinning Around’, ‘The Loco-Motion’ and ‘Love At First Sight’.

‘Underneath the bangers, costumes and confetti canons is an artist who craves to feel connected and delights at bringing joy’ – Time Out London

Joining Kylie across all Australian shows will be close friend Jake Shears. As the lead singer and a primary songwriter for the multi platinum-selling glam rock band Scissor Sisters, Jake shot to fame off the back of hit singles such as ‘Take Your Mama’, ‘I Don’t Feel Like Dancin’’ and ‘Comfortably Numb’. Earlier this year he made his debut on Broadway in the lead role in Kinky Boots, released his debut book and memoir ‘Boys Keep Swinging’ and released his self-titled debut album in August, featuring the single ‘Creep City’.

Kicking things off at the a day on the green shows will be Brisbane’s Hatchie. It’s been a huge past year for the talented singer/songwriter, with her debut EP Sugar & Spice winning praise across the globe. The five-track collection, which has notched up 7.5 million streams and counting, includes singles ‘Try’, ‘Sure’, ‘Sugar & Spice’, ‘Sleep’ (Pitchfork’s ‘Best New Track’) and ‘Bad Guy’. Her latest single ‘Adored’ is already a favourite at triple j and showcases another exciting chapter for Hatchie.

Stay tuned for the announcement of an additional special guest soon.

The Golden Tour is the first opportunity for Australian fans to see Kylie’s new music performed live in addition to a number of classic hit singles. Fans are encouraged to secure tickets early to avoid disappointment!

a day on the green shows
with special guest Jake Shears & Hatchie
(plus an additional special guest to be announced!)
Visit adayonthegreen.com.au for more information.