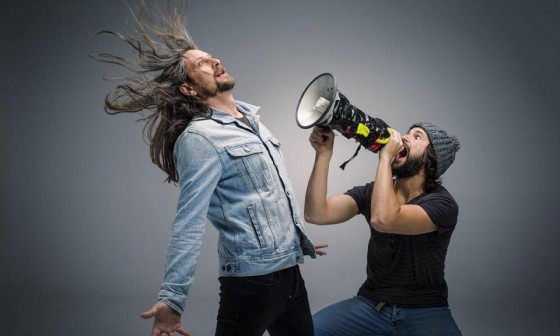 Mildura duo Jackson Firebird are gearing up for the October 30 release of their second studio album, Shake The Breakdown; a 12-track stoner-garage-blues riffathon that perfectly bottles the wild energy the band have cultivated over nine years on stage. The guys recently filmed the clip for lead single and instant grat track, Mohawk Bang, while performing at Chopped Festival.

Album release day will also signal the start of a string of tour dates which will see the lads out on the road until the end of November. (dates below)

After the band’s performance at South By Southwest in 2013, the duo ducked into Austin’s The Bubble studios and spent four days with its in-house producer Chris “Frenchie” Smith (And You Will Know Us by the Trail of Dead, Meat Puppets, Built to Spill, Jet). The experience was so good, they decided to return in November 2014 to turn those sessions into a studio album.

Fuelled by burgers, beer and the finest Mexican food in Austin, the pair cut 10 originals and two covers over three-and-a-half weeks. Mohawk Bang! opens the record with “heaps of balls” according to front man Brendan Harvey. The album is a rollercoaster ride through rock’s turbulent past – from the stoner snarl of New Wave (a heart-warming tale of an ice head looking for love at a school social) to the glam strut of Devil’s Door, while Sick n Tired is a nod to their shared love of the blues.

While Jackson Firebird officially formed in 2006, the seeds of the band were sown much earlier. After hitting it off as teenagers, they began jamming on Tuesday nights at the Hudak family bakery in Mildura. They’ve since toured the world, supporting the likes of Gary Clark Jr, Eagles Of Death Metal and You Am I along the way.

“The absolute best thing about being in this band is playing rock’n’roll all over the countryside and the globe with my brother-in-law,” Brendan says. “Not to mention meeting and hanging out with our fans; just getting to see them get enjoyment out of the tunes we wrote.”