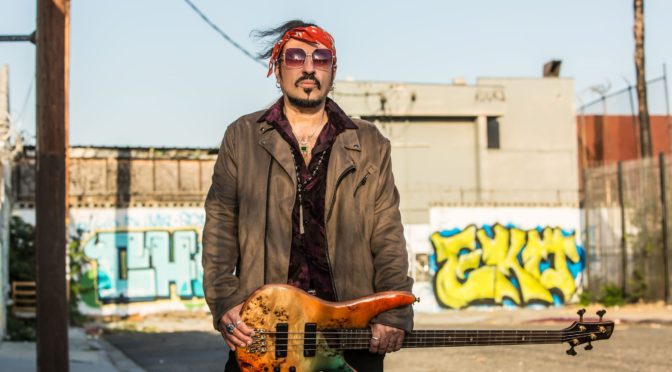 While reviewing the “Fabrizzio Grossi – Soul Garage Experience” album, I got the chance to throw a few questions out to Fabrizzio…

Q: You have worked with a long list of musical heroes – what is the secret to a successful collaboration, whether with George Clinton, Steve Lukather, Glenn Hughes or Alice Cooper – all of whom one might say are somewhat larger than life personas?

A: That’s because you haven’t met mine yet! AHAHAHAH!  Kidding aside, I don’t really see it like that, we’re doing our thing. Somebody’s flashier than the rest, somebody’s louder than the rest, somebody is more irreverent than the rest, but you know what? All of these people are for real: what you see, what you hear, what you get, it’s 100% honest, and as long as you’re honest and show your true self, there’s absolutely no reason why you couldn’t get along.  Don’t get me wrong, not everyone’s a saint, there’s plenty of AHoles out there, but luckily I made a promise to myself to only deal with real people, and that’s what I do.  Artists have and are something special, so I would be actually turned off if all of these cats were plain white bread!

Q: Now that you are the band leader, how have you found the differences between being the “dude on the bass” and being the writer, musical director, front man, producer and chief “wrangler” of the SGE

A: To be honest I never been only “the guy on bass”. Whereas I am producing, writing, playing, managing, filming, I am always all of the above together, it’s my nature, I don’t know how to do it any differently.  It’s just that when you’re doing that for somebody else, you need to know your place, understand and respect that “it’s not your record, or, it’s not your spotlight”….at least as far as what the public needs to see, and act accordingly.

With my other band, Supersonic Blues Machine, even though I am writing most of the music, I am producing and up till now I was managing as well, I have two very strong mates and over the top musicians with Kenny Aronoff & Kris Barras.  In addition we always have some pretty intense guests as well, so it cannot be me, me, me…there’s a time and place for everybody.

With Soul Garage Experience, it’s exactly the opposite. It’s the output that allows me to say, do and play, everything that , for one reason or another, I cannot always do . Here I am actually forced to be up-front and out in front, coz that’s what keeps everything together.  Basically the only difference, is that I am singing more leads, and taking more of the spotlight, but as far as everything else, it’s business as usual, if you know what I mean.

Q: I have not delved too deep into the lyrics on the record, but wondered if there were any key global or US themes that were your focus while writing the album?

A: Absolutely, but it’s more international than that. When it comes down to song writing in the lyric department, and I am making another reference to Supersonic, I am always extremely personal,  but that’s a band with other musicians with a strong personality and personal views, that within the band are respected and embraced, so even though we are all in agreement with where the world is today, its beauty and problems, spirituality etc. we like to keep the messages of our songs  very positive, very loving but in a Lennon/Dylan type of way, never really political. Even though we think alike, it wouldn’t be fair for me to put words in my band mates and guests mouths.

With Soul Garage however, not only I don’t need to ask permission to anybody to play what I wanna play, or say what I wanna say, but actually I am having the chance not only to be as personal as possible, but also as unfiltered and unapologetic as possible.  I was born in Italy and even though I am an American at all effects and for longer that I’ve ever lived in EU, that part of my upbringing, my family history, the sufferance endured by them during WWII with the concentration camps, the abuses, but also the social conscience developed by the continent right after the war, it’s something that’s part of my DNA. I had to include that in my songs….it cannot always be “tits and asses”. In that sense I am much closer to Bob Marley, or Marvin Gaye, or even Tom Morello, than I am to Motley Crue, as much as I love all of them crazy guys !

Q: Derek Day’s guitar work is pretty impressive throughout – with more appearing at each listen – where did you find him and what was the immediate attraction?

A: I’ve known Derek since he was 16.  I met him when he was busking the Santa Monica pier playing covers by himself and killing it for everyone.  He immediately blew me away, for his energy, his playing, his voice (he’s the singer for LA’s Classless Act) and he’s one of the nicest and most positive persons I’ve ever met.  That’s the common trait in Soul Garage Experience – we all travel at the same frequency of positive energy!  But I have to say that Derek is definitely the extra gear of the crew. There’s a reason why along with Steve Vai and Vernon Reid we kind of teamed up for “the bettering of Derek Day notoriety in music world”.  He’s such a genuine and honest talent, with an incredible personality, you watch – he’ll be the next big thing !

Q: As a drummer myself, I have always respected Kenny A as a quality session player across such a diverse musical range (closet country music drummer!) – low-key but so precise and solid – what is it like to play with him as a bassist?

A: Incredibly gratifying, but also terribly limiting LOL. I mean, he’s one of the world best drummers for a reason!  He is solid as f**k, beyond reliable and a wall of sound by himself. Touch, feel, technique, performance….he’s always on the zone, and that,  unfortunately makes it amazing when we’re playing together, but it also get you used to play with best. That raises the bar quite a bit, and basically limits your options when you have to choose a drummer, coz you got soooo spoiled!

Don’t get me wrong, there’s plenty of amazing drummers out there, but when you find somebody that’s your rhythm-soulmate, it makes it very hard to replicate that feeling with just any other “great’ drummer.  As a producer I always go by the motto “a band is only as good as its drummer”, and I guess that explains why Supersonic doesn’t sound like any other Blues/Rock band …it’s the Aronizing factor!  LOL!  However, I feel double blessed, since with Soul Garage I get to play with another “over the top drumming royalty”, one of my closest friends, and possibly the most creative and spontaneous drummer I’ve ever played with, and that’s Stephen Perkins!  His style is completely different than Kenny’s, but he has such a personality, drive and energy, which are extremely compatible with my views a playing. I am extremely lucky to have these two monsters in my life!!!

Q: What has it been like being a founding member of the Supersonic Blues Machine venture?

A: Supersonic is very much alive.  Covid got us to postpone everything we had in the can, and that sucks, but we have a new record coming that has been ready for more than a year, but I’ll let the label do the talking on that front.  Just know that we’re very excited about that and about all the shows that we are currently been re-booking for the third time, but that hopefully we’ll be able to perform around the world without any further delays.

SBM has been a blessing and quite a ride from the very beginning.  It’s what got me back touring and feel like a king, having all of these friends and guests that record and tour with us. IT’s always fresh and there’s never a dull moment, so I am really happy about what we have in front of us.  The only regret is that I wish we could be playing more than what we did so far, but that looks like it’s going to change very soon, so……right on !!!

Q: How highly do you rate Kris Barras as guitarist and front man? (I met and interviewed Kris in the UK a couple of years ago and really rate him as a player).

A: Kris is one of the top cats out there today, bar none, and he’ll be so for a long time.  Not only he plays like a mother**ker, but he blends that already scary talent with a quite damming singing style, that he masters with a scary consistency.  I don’t know how he does it, but he does, and I am glad he does not with us. He’s definitely the son of his land!

He carries the torch or Gary Moore, Rory Gallagher, Robin Trower, and I believe he brought a great element to the SBM sound. His guitar approach reminds me a combination of Robben Ford and Steve Lukather, and that’s because his music knowledge is quite defined and deep, but ultimately it is his personality that allows him to deliver how he delivers.  I do believe that was his martial arts and the rigidity of his MMA fighting discipline that allowed him to become the talent that he is.  Regardless though, I am happy he’s my friend and our front man …indeed !

Q: I’d love to see someone like Eric Gales in the SBM line-up….but there are so many young top quality blues-rock guitarists around that is difficult choose……..do you have a particular target for a future album collaboration?

A: Eric is possibly the best guitar player of his generation out there.  All the challenges of his life that he was able to overcome and use as a source of inspiration for himself and a ton of fans, together with an otherworldly ear and talent, made him the guitarist that he is. We shared some very important stages with Eric, from the UK to India, and everything in between, and let me tell you, when EG is on (basically always) the energy gets an extra bump …absolutely one of the best and another dear friend, with whom I share a very deep bond.

At the moment I am not really at liberty to list any upcoming surprises and collaborations …label rules….but I can assure you that whatever’s coming it’s going to be in a good Supersonic Blues Machine tradition!

Q: Finally, what’s next for Fab…….when the world finally gets out of lockdown into whatever the new normal is?

A: I am releasing Counterfeited Soulstice Vol 1 because I wanna get busier with the music I like to play, and that hopefully will give me/us more opportunities to perform even more that what I’ve been doing so far. I want to travel and play this music with my friends for all sorts of people, giving them a good time. I hope this record becomes another steady output for my ideas, and another part of myself that I can leave to my kids, so they can remember me in many more ways, and ultimately to get people to think, and stand up for themselves against injustice, discrimination and sufferance.

Having said that, between Soul Garage, and our upcoming shows, Supersonic’s new record, tour and a few movies projects that I am involved, I am pretty sure, I’ll be quite busy for the next couple of year.  Hopefully heading down your way pretty soon too!