WM – He worked on the first two albums we did which was absolutely wonderful. He came along at a time when we were still a young band and had no idea what to do and came up with the idea of either recording in Australia that would be a very national sounding recording or do something overseas that would really stand out in the international scene.

Adam was the only one we knew, and luckily enough he took a gamble on an Australian band and helped us out with the recording. The way he did things was so good that we decided to go back to him for the next album and do the same thing. Basically, among the qualities he brought to the album included a very very precise, very clinical sound and very clean in the sense that he knew absolutely everything that was going on. He had a sound that, at that point in time no one else in the world was replicating so it was wonderful to be able to work with him so many times.


LMM – You speak about that “sound” he brought to the album. A lot of people; again reviewers and fans alike have noticed the relation to the Killswitch Engage style…


LMM – It’s definitely an obvious attribute from the production side of things.

WM – Well he plays guitar in Killswitch and he is a very talented musician in every sense. He studied music and sound and has played in some very interesting bands. I guess he started recording Killswitch, and when that sound came out on our album it was something that we couldn’t really improve on, it was just done without making a massive change to his production value which consists of the pinnacle of that sound so making the comparison to Killswitch is definitely a valid one!


LMM – So in comparison to having just recorded Deep Blue with Joe Barresi who’s worked with bands in a slightly different genre, Queens of the Stone Age, Kyuss and even Coheed and Cambria. Do you think he may have contributed to the album having a more grounded and slightly less hardcore feel to it than the last release?

WM – Yeah that was the exact idea we were going for as well, we were trying to work with Adam again to start with because we really love his work but we couldn’t coincide our schedules to get together. We were basically left with no idea of what to do then and a friend who works for our label mentioned Joe Barresi was an amazing producer and suggested we check him out. We were concerned at first and even said “Oh man he’s done nothing that sounds like our kind of music, in this kind of genre” but then we thought that it could be a really good idea, as it was three years since we’d done a record. With Adam we’d found that people had come to not so much copy the sound that he’s been creating but try and build on top of it to the point it had become really sterile. The sounds that had been produced were just really mechanical, and we didn’t like it. We wanted to make something completely opposite which was something organic… that sounded like humans playing music! Something that had a lot of life to it. We figured if Joe could make a band as fast, heavy and crazy as our band sound so big and so great, if we gave him our sound, maybe he could really do something incredible with it. Everything we thought he’d do, he did for us which was awesome!


LMM – We’ll the albums only going to get more and more well renowned as time goes on..

WM – Well hopefully.. and if it doesn’t.. in all honesty… we’ve had the best experience making the record and we’re 100% happy with it, as we are with everything we’ve done in the past but I really really love the production we did on this record. Right from the word go we asked ourselves what we wanted to achieve with this album. We wanted it to not be another drop in the ocean of bands. Joe completely agreed and showed us how we could accomplish that. He just got it from the word go. He understood we wanted to make something far from standard. Chip off the old bock I guess.

LMM – So if you had to pick your all time favourite Parkway song, what would it be and why?

WM – Oh God! It’s really hard because they’re all so different in a sense. I guess if I have to choose it would be Deliver Me, just because it’s very diverse. Very different in every part. Heavy, soft, fast, mellow. It’s the one song we have that goes from one end of the scale to the other and back again.


LMM – What about the other guys? Do they have any particulars they like to play more than others?

WM – Oh it varies from person to person and we’re at a really fun point in the bands life being that we hadn’t done anything new for three years, now we’ve put the album out we’re playing these songs for the first time live. It’s like being given a new toy to play with. All of a sudden we’ve got 13 new songs to muck around with!

WM – *Laughs* Yeah! But it’s like getting a box set .. you have so much to choose from all of a sudden. I remember in the past when we wrote new records we would have played five or so of the new songs over the period of writing before we went into record. So live, we would then have only 6 songs or so to play around with. This time we decided not play any other than Unrest, which was good because when the album was released, we had the rest use.

LMM – I heard that horizons went not just platinum, but multiplatinum in Europe? Is that right?

WM – Hmm I don’t know about that.. That’s a Wikipedia fact that someone’s just made up I think. But then again it could well be multiplatinum.. we wouldn’t know. We don’t have a lot to do with sales and we never really heard back from them.. so I guess it could.. but I’ve never received a multiplatinum plaque! I think it’s definitely a non grounded random fact

LMM – So you’ve obviously read your own Wikipedia page then?

WM – *laughs!* Yeah I get online every couple of months and see what new stories people are writing about us.. but I can never be bothered correcting anyone if it’s wrong! It’s funny stuff you know.


LMM – If you guys could facilitate your own metal festival.. if you ever had that opportunity.. who would you have on the line up?
WM – Oh God! Um…

LMM – Any up and coming aussie bands that you think may be underappreciated and need a little bit of publicity?

WM – I think in Australia.. the best metal festival… which is no longer going was Metal for the Brain. They did such an amazing job and I think it’s such a pity that they’re not going anymore.. but if I had a choice I’d leave it up to them and bring that back. No Sleep Til is gunna be sweet though! I guess because I’m away so much I’m a little out of touch. Bands come and go, like the other day I got given a demo by a dude in some car park in Byron Bay of a local band that I didn’t even know existed, because I’m not here to know they exist!

LMM – So what’s in store for the future? Do you have plans for the band over the next year of so, or any side projects coming up?

WM – We’ll definitely be playing our music for other people and this band doesn’t seem to really stop at anytime. Even in our spare time we’re still writing and jamming. I guess with having the new album our people are wanting us to play more. We have the No Sleep Til booking in December.. and in two weeks we fly over to Europe for a months tour over there, then fly back for a couple of weeks, then we’re off to the states… so yeah it doesn’t ever seem to stop. Every time we think we’re going to be able to have a break.. something else comes up.

LMM – We’re very much looking forward to seeing you play at No Sleep Til!

WM – And we’re very much looking forward to playing! 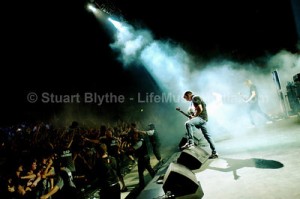