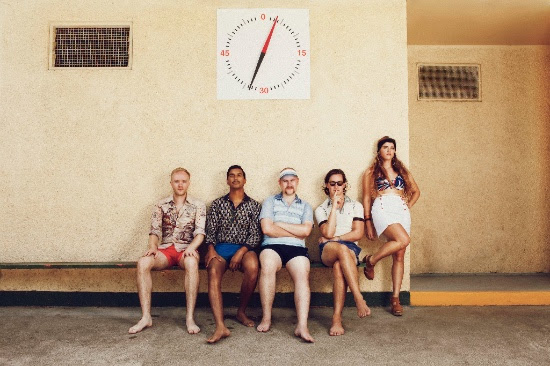 Currently on tour in support of their new EP ‘Miles Away’, we caught up with Tully On Tully for a quick chat.

You have a new EP coming out called ‘Miles Away’. Tell us a little about the album.

It’s our second E.P that was born out of a stint in North America (namely N.Y.C and Toronto) in 2014. We were actually 10,000m away from home and had a pretty long few months on the road ahead of us. I think distance and wanderlust pretty naturally became thematic in the music and lyrics. When we eventually got back home to Melbourne after a few dates in Asia we hit our studio and demo’d a bunch of songs and really focused on every element – from their production to their form and instrumentation. Once we were happy with what we’d created we spent some time in a studio in the Dandenongs and committed the final versions to tape.

Do you enjoy the writing/recording process or prefer touring and playing live shows?

We love both sides of the coin to be honest. We self produced a lot of the material on ‘Miles Away’. There’s really limitless creative boundaries and I love that and really getting involved in the nuances of how a song is going to sound on wax is addictive. In saying that, playing a busy, hyped show is a massive rush, and getting to go to new places and see the world while on the road is a pretty big kick too.

You’re currently playing a string of headline shows throughout Australia to highlight your new material. How is the tour going so far?

So far so good! We’re playing at The Workers Club in Melbourne this coming Saturday night (16th April) which – being our hometown – should be wild.

We’re pretty normal I (would like to) think. We usually just hit the turps and talk trash with the other bands on the bill until showtime.

Hopefully a memorable experience. Natalie moves a lot so a sore neck could also be on the cards.

After your current tour what do you have planned for the rest of the year?

Hopefully we’ll be getting back into the studio to work on a few new numbers. Also a heap more shows around Victoria and probably interstate too.

Is there anything you would like to say to our readers?

Seeya in the pit!! Xox

Off to a flying start in 2016, hot on the heels of an intense period of song cultivation and recording Tully On Tully are taking their refined new material to the stage.

Playing a string of headline shows around the country in support of their sophomore EP Miles Away set for release in May, the band’s live performance is guaranteed to highlight their new music, peaking with energy and unperturbed confidence.

Miles Away was written whilst the band were abroad in New York City and represents their experiences in the insomnolent metropolis and the tyranny of distance. Upon their return to Australia Tully On Tully retreated to a recording studio in the Victorian highlands to put their new work to wax.

Deviating stylistically from their last release, on Miles Away the band harness a myriad of sounds and influences. From the stadium drums of the 1980’s, aurally engulfing guitars of The War On Drugs to carefully honed synthetic sounds akin to TV On The Radio or Phantogram.

Tully On Tully recently worked with Diana and Leo of the Around The World In 80 Music Videos Project to produce latest video clip for ‘Honestly’. A collection of 2,500 still images, the band wanted to highlight the city they call home, Melbourne. Watch the result here:

The Miles Away tour kicks off later this month and sees the band join festival line ups at The Hills Are Alive and Moonee Tunes.

Visit www.tullyontully.com for all tour updates.