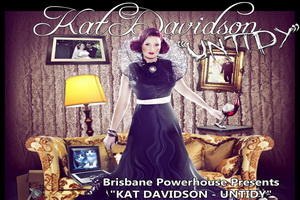 Kat Davidson is a comedian. She would like you to think she’s funny, insightful, and sharp… but deep down, she’s UNTIDY.

Not too many comedians have such an eclectic resume‘ as Kat Davidson does, then again, there aren’t too many like her to begin with. She has been wetting the pants and causing the tears of laughter of audiences in Australia and overseas for the past fourteen years. She unloads her comedic storytelling on the stage but can also be heard on local ABC radio as a presenter. She has headlined and supported some of the biggest National and International comedians on the stage with great success.

With her new show “UNTIDY” ready, spit polished and set to amuse, Kat hopes to show the comedy fans who see it during The Brisbane Comedy Festival at The Brisbane Powerhouse from February 28th to March 4th 2012 that our lives our made up of underlying comedy full of mess, clutter, and untidy random events.

I caught up with her before she was to go on The Pacific Jewel Cruise Ship to perform her stand up shows and sail the Pacific Ocean. Who ever said Stand up Comedy is dark nightclubs and no glamour?

Chris Dornan LifeMusicMedia: Well it’s finally good to catch up with you from you busy lifestyle of doing Comedy, Radio, and casual House Wife duties. You must have a bit of excitement with the school girl nerves building up with your new show “UNTIDY” featuring at The 2012 Brisbane Comedy Festival. What can the public and I expect when we come and see it?

Kat Davidson: It’s going to be a departure for me. I’ve been doing club comedy for the past fourteen years so it’s still stand up and it’s still funny. It’s a little bit more narrative and a little bit more personal. The theory behind it being called “UNTIDY” is I believe most people are and we hold up a façade to the world that looks pretty together but underneath it all there is a great deal of untidiness. I’ll kind of be taking off the mask for a little while and let the people see some of my untidiness in a vain hope that everyone else is just as messy as I am.

Chris Dornan: You started out in theater sports in the early ninety’s to get confidence and to get out from underneath the shell you had been living under. I guess it worked since it led to stand up comedy and you made a career out of it. Do you ever want to crawl back under that shell and hide with the messed up world we live in?

Kat Davidson: Oh! Every now and again. Most of the time I’m a pretty happy human but when something awful happens in the world or I get up and do a gig and it goes badly I just want to crawl under the doona for a little while. Occasionally I want to run and hide but I’m pretty attracted to shiny things so I don’t intend to stay down for too long before I get distracted by something shiny again.

Chris Dornan: Do the dark and depressing times in your life help you to kick you self in the ass and get better material and become a better comedian?

Kat Davidson: Yes I think when you’re in those dark times you tend to go inside a bit. I start looking at what’s really going on in my heart, my head and my life and when I really start looking is when I find the funny stuff in life. You see the absurdity of it and how small you are if you make your problems too big. I’m an Australian so the full position is to find the funny in it. Sometimes my humor is a little ‘gallow’ and there is stuff that doesn’t make it to the stage but I’ve been known to laugh my way out of the tears.

Chris Dornan: That’s good. Tears are sometimes good but I guess it works both ways.

Kat Davidson: Yes we are human beings. Thankfully society is changing a bit so it’s ok for us to show the full gamut of emotion. I think particularly in the ninety’s where we had to be ok and your ok. But it’s now ok to say ”I’m a bit sad today” or “Today the world is just too weird for me to deal with.” So when we have those happy times it’s balanced.

Chris Dornan: Through your eyes and ears, is the comedy scene in Brisbane and the rest of Australia getting better or surviving?

Kat Davidson: It’s thriving. I’ve spent some time recently in Perth and Melbourne. The Melbourne scene is really good but tends to revolve quite heavily around the Melbourne Comedy Festival. There are clubs that tend to die off and aren’t as busy outside of it. I think they are particularly the months around the festival. The feeling is where the people have just seen Arj Barker and Carl Barron and who the hell are you? Places like Perth and Brisbane have really created their own scene because those acts don’t come up here or feature as often. We really have a powerful thing with our own style because the audiences can be tougher and a bit rowdier. When we go down to the clubs in Melbourne and Sydney we’re pretty well trained.

Chris Dornan: Do you have any favorite new comedians who have a differ approach to comedy that needs mentioning?

Kat Davidson: Damien Power is one. His second show is running during the Brisbane Comedy Festival as his first one was a sellout last year. I think he is amazing, he’s been doing stand up in Brisbane, an up and comer and I think he is awesome. In Perth, Bonnie Tessa Davies is an up and coming lady and I think she’s pretty amazing. Probably those two off the top of my head.

Chris Dornan: What’s your take on the political side of the boat people issue from a comedic take? Does it make you want to stay in Queensland and Australia or would you ever consider moving away from all our political issues?

Kat Davidson: I think our political stuff is pretty tame compared to the rest of the world. I work for The ABC as well as being a standup comic so I tend to keep my political views to myself it’s kind of ingrained into me. But I think Australia is in its teenage years. We’re a little bit whingy and kind of whining and wanting it all to ourselves and not sharing our toys with the rest of the world. I think we’ll grow out of that and become a true multi-cultural nation when we realize how big Australia is and there is room for everyone. My view is, regardless of the topic, usually tolerance and for people to do their research before they fly off the handle.

Chris Dornan: You’re married to another comedian and radio presenter (Stav from B105 Brisbane) why haven’t you two reproduced yet? Is it from lack of trying or you just don’t like kids?

Kat Davidson: Were you hired by my mother?

Chris Dornan: No. I was just wondering.

Kat Davidson: I’m away a lot. That probably doesn’t help. But you never say never. It’s the lifestyle, particularly when the female travels more that the male. It doesn’t tend to let themselves to the making of babies.

Chris Dornan: You’ve been doing stand up for quite some time now and I think you want to continue doing it. Would you like to be dignified like the veterans Phyllis Diller, Joan Rivers, and our very own Dame Edna? Do you intend on doing comedy that long?

Kat Davidson: That’s a hard one. I don’t really know. I think it’s the makeup of most entertainers that they’re a little bit flighty. There is a chance that I will be doing something entirely different when I’m their age but if I’m still loving it as much as they clearly do then yes I hope I’m doing comedy. I hope the older I get the more confident I am to do whatever it is that I love the most.

Chris Dornan: This question is kind of a random one… If you were a tree and your husband was an animal climbing in it. What kind of tree would you be? What animal would Stav be?

Kat Davidson: Yes that is random. Possibly a Redwood because I’m very tall and red. I’m a ‘ginger’! He’d probably be some kind of exotic cat creature, maybe a leopard. They don’t tend to meet in the same forest now that I think about it. It kind of works because we’re from different countries. I think he’d be a sly one that would just leap up and get amongst it.

Chris Dornan: So what’s next once the 2012 Brisbane Comedy Festival is over and the punters have gone home? Housework? Holiday? More travel?

Kat Davidson: Yes more travelling. I have quite a few cruises and comedy cruises aboard the P&O ships which is a pretty good way to get around and do stand up. I also have a tour to Melbourne booked and some more work with The ABC, so I’m filling the year as I go. I’ve been really dedicated to my show UNTIDY and haven’t had a look past it. The year is definitely filling up and it’s looking to be a much better one than 2011.

Chris Dornan: Is there any other shows besides yours that you could recommend to see at the 2012 Brisbane Comedy Festival?

Kat Davidson: Tom Gleeson without a doubt. He has been described by many people as the most informed comedian in Australia. I will be doing a comedy cruise with him that I’m very much looking forward to. He is one of those comics regardless of your background, age, gender or your own preconceptions about comedy; he will absolutely leave you in stitches. Come see me! (Kat Davidson), see Tom Gleeson, and then go see Damien Power.

Visit Brisbane Powerhouse for all show dates and times. 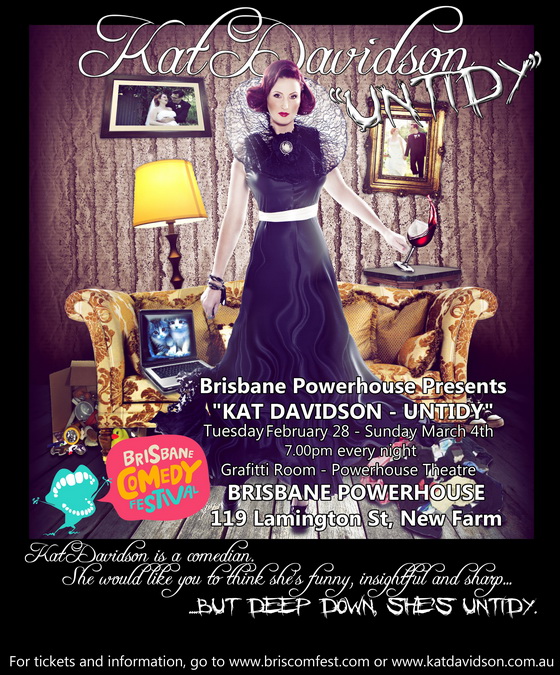