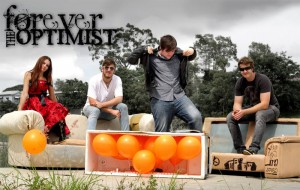 There are a lot of bands to look out for in 2012. You will read various lists and recommendations. One that needs to be added to those lists is from Brisbane. They are from the birth place of many independent and unsigned bands that are making some killer-rock sounds at local and National gigs. They are …..Forever the Optimist.

Forever the Optimist just released their newest single and video clip “My Design” from the their self titled debut EP “Forever the Optimist”. Having played with some great bands in 2011 such as Thousand Needles in Red, Calling All Cars, The Redcoats and Floating Me, the future is looking great for this hard rocking alternative band.

Life Music Media (LMM): I just had a good listen to your self- titled album the other day and it is a fresh and fearsome achievement for your first EP. How has the ride been so far?

Daniel Page: The rides been great. It’s interesting how far we’ve come in the last year since recording that record. We went in the studio with six months worth of songs and it came together, we did the best job we could and we’re really happy with it. This year has been flat out. We’ve been doing a lot of gigs and playing with some awesome bands with great opportunities. We went on a mini East Coast tour with some friends of ours “Stellar Green” and it’s was excellent. We’ve been getting a really good response to our shows and a lot of positive comments towards the record. So we are pretty happy.

LMM: The Video clip for “My Design” was recently released and I’ve got to say it is a visionary collection of great video with a marriage of riffs that fit together. Who came up with the concept for the video?

Daniel Page: The concept was a combined effort from the band and the director Michael Gillet. He is a student at Q.U.T. He wanted to do a video as a project and it all just fell into place. We were lucky enough to go into “Tall Poppy Studios” and use their tracking room for the location. He edited it and it all boiled down to him and a big crew of other students helping him out. They helped out with the production and lighting amongst other things. For our first go at it I think it turned out really well and very impressive.

LMM: The idea of using orange balloons really stood out and gave it life. Whose idea was to use them?

Daniel Page: The orange balloons have been a bit of a motif we’ve had going for a while. On our album art there is a balloon tree that was designed by a friend of ours Tom Graham and it was originally an idea by someone’s ex-girlfriend. So the idea has been around for a while. It’s kind of ironically optimistic and the orange balloons have been a part of everything this past year. We’re probably going to move on to something else new this year. It was to make it stand out a bit rather than just a band in the studio.

LMM: How long has the band been playing together? The idea of using three guys and one girl to successfully produce the energetic collaboration your band creates really works.

Daniel Page: That was a complete accident. The drummer Andrew Knox and I have been playing together casually since I moved to Australia in 2003. Jamie Page who is also my brother joined on vocals and bass. We had a few songs going and just messing around for a while. I met Kelly Buckman at an Australia Day Party and I knew that she played guitar. She went off and had a jam on her own and I heard her playing and I asked if I could join in and we hit it off immediately. I invited her to a rehearsal and she slotted right in. Obviously this was in 2010 and we realized we had some half decent songs and we started to take it a bit more serious. Our first gig together was at the HI-FI BAR in Brisbane for The Battle of The Bands Competition so it was a great one to cut your teeth on. Now we have a good dynamic group together and everyone just fits into place. It wasn’t a deliberate attempt to go and look for a female guitarist Kelly was just a good player a she fitted in very well.

LMM: Using Triple J Unearthed, Facebook, iTunes and other forms of social media to get your music out there. It looks like the direction a lot of bands are headed at the moment. Has it improved your fan base?

Daniel Page: Absolutely, Facebook is an amazing tool. I really didn’t know how to use Facebook until this past year. We started getting more fans on Facebook and it’s been great to keep people up to date with the use of it. iTunes have helped us to make quite a few sales this past year of our new EP so it has definitely helped; Triple J Unearthed is always a difficult one as I don’t know how beneficial it was for us. We didn’t do the best job in plugging it on Triple J Unearthed we just hoped for the best that people would have a listen. Next time we will do a bit more planning to get more people to have a listen.

LMM: You have been playing with some great bands over this past year which band really stood out and accepted your music for what it is?

Daniel Page: The experience playing with Floating Me was great. We are all big fans of theirs and it was a great experience to get some props from Andrew Gillespie and the band. We had a really heartfelt chat with him and the whole experience was incredible. Thousand Needles in Red have been great to play with. We went up to Bundaberg with them to play a show. They were so accepting and we had a great time afterwards drinking till the sun came up. It was just great to get some positive feedback from people we respect in the industry.

LMM: When do you guys plan on going back into the studio and laying down some more indelible riffs, energetic drums and matching deep vocals?

Daniel Page: We have been in pre-production. We’re just recording some demos at the moment. It’s about ten songs and we’re aiming to go into the studio mid July and record our next album. Then do a single release in August and then an EP Release late in the year or early 2013.

LMM: I’ve been told your band is looking at a possible Japan Tour. Why Japan and when are you going to show the Japanese music scene your talent?

Daniel Page: The Japanese music scene is pretty huge from what we’ve heard. Touring around Queensland, Brisbane, and Northern New south Wales we were lucky to get fifty people to a show on the road. Apparently Japan is not like that at all, people just pack out venues. It doesn’t matter whose playing the people are just there to listen to the music which is a bit different than in Australia. We had the opportunity offered to us. The tsunami happened and that put things back for a while. This year is still in the cards as we have a promoter over there that is keen to get us there. It’s just the case of having the resources to be able to do it. It is on the shelf but we’re focusing more on Australia at the moment and the response we are get from the Australian music scene. We will be touring in April with a French band called “Harmonic Generator”. We will be going to Melbourne and back to Brisbane, and then as far North as Cairns which should be really good.

LMM: Well 2012 is here and you’ve told me a few of your plans. What can the rest of Australia expect to see in your live show and are you planning any big changes?

Daniel Page: That’s a good question. We want to make more use of lighting this year. We have been doing local shows and if were supporting a bigger band their lighting tech. will never do lights for us. So we have got to start bringing our own guy and we now have a bloke who is very interested in doing our lighting. We want to make use of the visual aspects of the music as well. We are a pretty high energy band on stage and we like to get the crowd involved without being too over the top. Different from the past this year people will notice a more mature attitude towards the live show. We really want to try to perfect the art of portraying ourselves on stage. By doing this our music and ideas can reach the people who listen.

LMM: I hope you have a great year ahead and the success of Forever the Optimist continues. Like I said before music fans need to really have a listen to your music and hear what a real band whose battles and struggles in the independent music scene sounds like. I personally like that sound and I hope all your hard work pays off during 2012. I’m looking forward to your new music when it comes out.

Daniel Page: Thanks, the music will be different, a bit darker and heavier than the older stuff. It still has that energy that is so necessary in rock music these days. I hope everyone likes it as much as we do. We love the writing and getting it to sound the way we want it to sound. In the past we weren’t able to do that but with our change in attitudes and maturity. We can write good songs rather than parts of a song. Hopefully the next record kicks ass!

Check out the live photos of Forever the Optimist playing with FloatingMe + Electric Horse @ The Hi-Fi, Brisbane – 23 July 2011 | Photo Gallery