“Gang Of Four’s forthcoming Australian tour dates have been curtailed by some unforeseen family circumstances of a serious & personal nature. The decision has certainly not been taken lightly & we very much regret that we have to postpone the March tour. All tickets will be fully refunded & further tour dates will be rescheduled & announced soon. Apologies to all who have purchased tickets & all the inconvenience caused & a huge, huge thank you to everyone for their continued support. ” ~ Gang Of Four.
##### ##### ##### 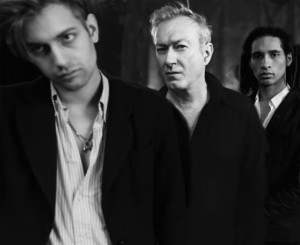 KillRockStar Entertainment, Tombowler and Tone Deaf present post-punk instigators Gang of Four in Australia to celebrate the 35th anniversary of their classic album Entertainment! along with all the hits that followed!

Entertainment! was a rare bird for its time, an enthralling amalgam of punk, funk and angular rock that signalled a changing-of-the-guard ushering in of the post- punk era. Released in 1979, this spiky collection of danceable songs would go on to inspire a generation – stripped of excess flesh, it revealed a twitching skeleton rising against apathy and commodity. The influence of Entertainment! is still being felt in music today. To celebrate 35 years since its release, Gang of Four will perform the entire album in full and all the hits that followed across Australia in 2014.

Gang of Four is one of the most radical, and radically important, rock groups of the last 30 years. Formed in Leeds in 1976, Gang of Four first performed in May 1977. All the big bands that followed, the Chili Peppers, INXS, R.E.M., U2, have spoken of their debt to Gang of Four but in more recent years, the band’s influence has become almost universal with the emergence of post-punk influenced bands such as the Rapture, Radio 4, Futureheads, Nine Inch Nails, Franz Ferdinand and Bloc Party. The band is led by guitarist, songwriter and vocalist Andy Gill, widely acclaimed as an innovator and much copied around the world.

Fuelled by the fury of punk rock and radical political theory, Gang of Four successfully welded the two in an inspired display of polemics and music that addressed the vagaries of life in the modern world (including love and romance) as matters of political inquiry. Despite the fact that this sounds rife with the potential for being long on rhetoric and short on groove, such was not the case. What made Gang of Four’s polemical clang ‘n’ roll so compelling was that it worked as harsh, bracing, and ultimately liberating rock & roll.

Andy Gill produced most of Gang of Four’s output, including the 2006 album Return The Gift and 2011’s critically acclaimed album Content. Gill has also produced albums for many other artists including the Red Hot Chili Peppers, the Jesus Lizard, the Stranglers, the Futureheads, Michael Hutchence and Bono, Therapy?, Regurgitator and Killing Joke.

“Tight and rambunctious”, “precise but deliberately human”: Gang of Four’s rhythm section, featuring Thomas McNeice on bass, has won acclaim over years and across continents as the engine of the band’s compelling live performances. Singer John Gaoler has been described as “captivating,” with an “uncommon voice”, and has been working with Gang of Four for the last two years, recording new material and performing at sold out gigs in China, Japan and all over Europe. Gang of Four are currently working on a new album which will be released in 2014.

Gang Of Four
Australia 2014
*Tickets On Sale 10th of January