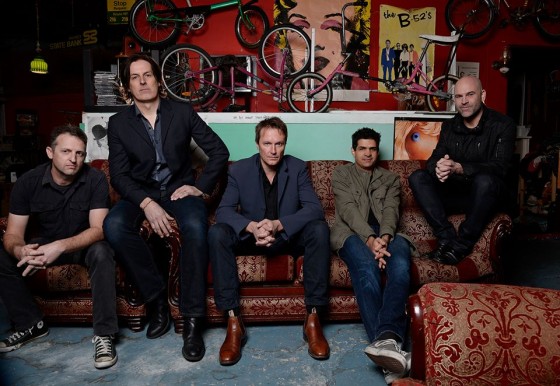 Five Mile Sniper’s debut album The Sound Of Trees, three years in the making, includes the collaboration of some of Melbourne’s best known musicians.

From jarring guitars and industrial beats through to wistful pianos and atmospheric synth arrangements, the album is eclectic. It dips into the assorted musical landscapes of early 80’s alt rock, post grunge, power pop, garage, indietronic and downtempo electronica. Each of the five members of the band bring to the record their own unique flavour, which makes for a colourful and intriguing listen that keeps the listener glued to the speakers.

From top to bottom, each song with its own theme is an unabashed commentary ona world gone mad and the struggle to make sense of it all. Covering topics such as youth suicide, cancer and depression it is balanced by moments of genuine joy and hope.

The standout new single ‘Amazing’ penned by John Baxter is song about his moving personal experience of fatherhood and the miraculous birth of his twins where struggle to find meaning in life is transcended through childbirth. The video shot entirely on location in London by director Andy Adlerslade is uplifting and inspiring capturing the true essence of the songs main theme.

The album’s opening track ‘Evolve’, written again from chilling personal experience, is about a family torn apart by the drug, Ice. It depicts the disturbing downward spiral of family break-up, crime, violence and the children – the true victims who are left abandoned and damaged.

‘Surround Me’ with its shimmering string arrangement and haunting piano arpeggio is reminiscent of the Doors hit ‘Riders On The Storm’. It is a song about enduring love – love that is challenged at every turn by the complexities and pressures of our world. An inspiring song, it is validation that love is strengthened through hardships shared together.

The Sound Of Trees is a shining example of our globally connected world. Produced, recorded, mixed and mastered in Tennessee, New York, Florida and Australia including three beautiful videos shot on location in Poland, London and Melbourne.

Featuring several tunes that were finalists in the 2014 International Songwriting Comp and singles that so far have had a combined 11,000 views on YouTube, each of the 11 tracks carries you on a journey that is thoroughly enjoyable and lasting.