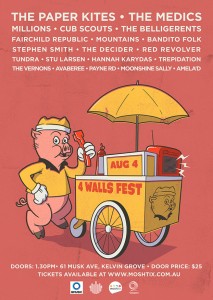 Three stages, eight hours of non-stop music and a variety of genres spanning from indie-folk to heavy metal, Brisbane’s 4 Walls Festival is an event geared to bring you the very best of Australia’s freshest up-and-coming talent. Now in its third year, the all ages event has seen the likes of Matt Corby and Last Dinosaurs take to the stage in the past, right before they were swept up into the loving arms of our nation. This year’s festival boasts a similar caliber of talent with The Paper Kites, The Medics, Millions, Cub Scouts, The Belligerents and Fairchild Republic announced as festival headliners.

Held at the Queensland Academy of Creative Industries in the heart of Kelvin Grove’s urban village, 4 Walls was launched by Youth Music Industries in 2010 who saw a gap in the all ages market. Initially set up to provide new musicians with the chance of gaining festival experience alongside some fresh Aussie talent, the festival has flourished into a hotly anticipated sell-out event.

Live, The Medics are truly something to behold. An exhilarating blur of passion and movement, the band bring an all-too-rare sense of urgency to their songs that underpin lead singer Kahl Wallace’s emotive delivery. It’s an intoxicating spectacle and has seen them quickly become one of the country’s most talked-about new outfits.

Millions are a bunch of young garage-pop marvels outta Brisbane. Barely twelve months old but brimming with enthusiasm, Millions’ songs ‘Those Girls’ and ‘Guru’ showcase the band’s shared love of swaggering rock with a hint of devil-may-care attitude.

Brisbane energetic five-piece Cub Scouts have been crafting a unique style of indie pop over the last year, turning heads with their last two infectious singles ‘Evie’ and ‘Do You Hear’. With a forthcoming EP on the way, the band have surged into 2012 with performances at Laneway Festival, alongside Ball Park Music and on their own recent headline tour.

Forming as dedicated party-starters in late-2010, Brisbane’s The Belligerents have commanded attention over the last eighteen months, sparking widespread acclaim and a countless number of appearances around the country. Their latest EP offering titled She Calls The Shots captures The Belligerents’ dynamic and energetic live set perfectly.

Fairchild Republic are a rock band with grand ambitions. Originally meeting at a Gold Coast high school, the band write emotional songs with a goal to move people. Kicking of 2012 with a Big Day Out performance, Fairchild Republic are now gearing themselves up for an album release in August. 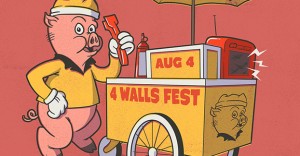