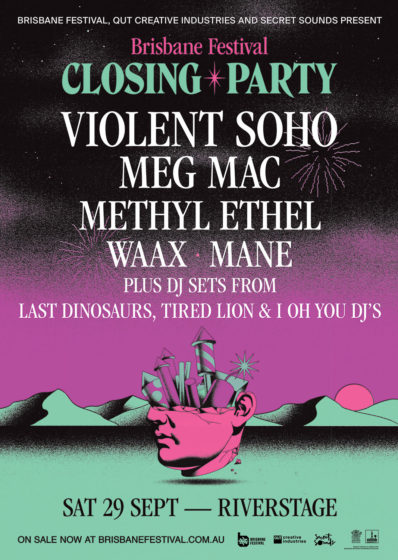 Levelling up with the addition of several new artists including DJ sets from some of the Sunshine State’s finest tastemakers, the massive Brisbane Festival Closing Party is growing to mammoth sized proportions.

Already generating significant buzz due to a primo location and the star-studded array of talent on offer, organisers have gone the extra mile by lining up number of additional delights for this explosive shindig.

Artists just announced include beguiling indie popster Mane, I Oh You DJ’s (also known as the guys responsible for Violent Soho, DMA’s, Royal Blood and DZ Deathrays), Tired Lion DJ’s (who will lay down some 90’s influenced grunge rock tracks sure to get the blood pumping) and Last Dinosaurs DJ’s – set to hit the decks fresh from the release of their first single in three years.

Picture this: you’re gathering at Riverstage, one of Australia’s most picturesque venues on a balmy Brisbane September night. All around you are the sounds of some of Australia’s finest artists… maybe Meg Mac’s neo-soul classic ‘Roll Up Your Sleeves’ is wafting across the festival? Possibly Violent Soho are ripping into ‘Covered In Chrome’ – showing no mercy to a besotted home town crowd.

Suddenly, an awe-inspiring array of pyrotechnics kick off as Sunsuper Riverfire begins: fireworks fill the air and flyovers thrill the crowd.