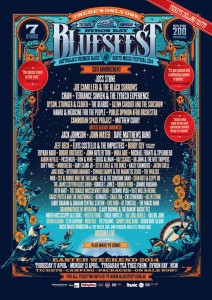 Bluesfest Byron Bay, Australia’s multi award winning 5 Day Festival, held at its permanent home, the Tyagarah Tea Tree Farm, north of Byron Bay, reveals the 6th round of artists to perform at its 25th Anniversary, over the Easter long weekend 17 – 21 April, 2014 and news from the Bluesfest office is, that this is NOT the final one!

True to Bluesfest form, there will be more announcements before the Easter extravaganza begins in just 3 months’ time!

This latest announcement focuses on our home-grown Australian Stars with a perfect mix of excellent International artists, whilst the 2014 line-up just keeps on growing, bringing out all the magnificent wonders of Bluesfest.

Announcement number 6 takes a journey across the Globe welcoming brilliant and very gifted artists from 3 continents (USA, UK and South East Asia) to Byron Bay, as well as bringing some true Aussie talent to the Bluesfest stages!

Bluesfest has established itself as an iconic event and is equally loved for the music but also for its unspoiled atmosphere. It’s an inspirational Festival loved by all ages and 2014 marks its 25thanniversary.

Putting together the talent to play Bluesfest for our 25th Anniversary Festival has not only been about whoto put on this year – it has also been about who to leave out!
So many artists want to play, and we just can’t fit everyone in, and of course the unavailability of a fewartists is always sad but you get that every year!

As the guy who gets to go through the thousands of bands from local artists through to a large number of the worlds biggest who want to play our big birthday this year- the task is enormous – it’s a huge challenge and very rewarding.

I feel that I am delivering artists this year who have been important – even pivotal in our quarter century of existence. We are presenting those who do great shows – which is what the Festival is renowned for – plus we continue to introduce artists for the first time, who we believe will be future major performers in years to come, alongside the legends and breakthrough artists for who we have become renowned in choosing to perform on their climb to the top.

It’s our birthday year – and we have pulled out all the stops to present our best ever Bluesfest – if ticket sales are the indicator of a great event – we must be right on target – as we are tracking toward a sellout, so don’t miss out.

I just caught Nahko at Michael Franti’s Soulshine Festival in Bali- and booked him immediately to come and play Bluesfest this year – WOW – what a talent. If you love Michael get ready, as Nahko has that same incredible vibe. He is going to be HUGE.

Joss Stone was only a teenager when she last played Bluesfest – she has since been chosen by Mick Jaggerto be co-lead singer with his band Superheavy – and released some of the most sizzling soul albums of the century. Her performances are show stoppers. She is just one of ‘those’ artist who will forge one of the great long term careers in music – in fact she is already doing just that.

Louisiana Zydeco master Terrance Simien, who first played Bluesfest in 1994 is back after too many years not being on our stages. To me he is unmissable – an absolute brilliant performer, songwriter – and oh that voice – only Aaron Neville can compete from that part of the world.

We have the long awaited return of two of Australia’s GREAT bands in Chain and The Black Sorrows – they each in their own way define Australian Roots and Blues music, are bona fide legends, and are still performing at the top of their game . Bluesfest 25 would not be complete without them.

Matthew Curry from Bloomington Illinois in the US is only 17 years old and is an amazing Blues guitarist and singer – don’t miss him – you won’t believe your ears. He has just been chosen by Steve Miller to tour with as special guest – and is being hailed already at his young age as potentially the next big thing in the Blues.

There is simply no excuse why I have not booked Glenn Cardier before on Bluesfest – he is one of Australia’s finest artists – and someone who should not be missed.
Rounding out this announcement is the Cambodian Space Project and the Public Opinion AfroOrchestra – both great combinations of Aussie musicians with those from Cambodia and Africa respectively.

One of the hits of Bluesfest 24 – The Beards are coming back and we are very pleased to be announcingMia Dyson, Liz Stringer and Jen Cloher who will be combining their simply marvelous talents.

It’s all coming together – our doors will open in 3 months time to what we intend to be our best Bluesfest ever…….roll up – roll up – it’s the event of the year.

All Festival and Camping tickets are on sale through www.bluesfest.com.au or by phoning the office on 02 6685 8310

Tickets are also available through Ticketmaster on www.ticketmaster.com.au