Now in its fourth year, Wildwood Music Festival proves again to be one of the annual shining jewels in the Australian boutique festival crown.

On the first day of daylight savings, the carefully curated, red hot collective of inspiring musicians come together with live music lovers, for a perfect day in paradise.

Just four hours north of Sydney, Wildwood Music Festival radiates a magical energy from the natural beauty of the forest like surroundings and laid back atmosphere offering an intimate and personal connection with performers.

Australian quartet The Jezabels shimmer with their empowering anthemic approach to indie pop. Over the course of a decade, the band have unlocked the mysteries of the indie universe and broken through to the mainstream following several gold and platinum releases together with shows from Splendour in the Grass to Lollapalooza. Winning several AIR and Rolling Stone Awards, their unique and powerful music collected a diverse audience which culminated in them winning an ARIA Award and Australian Music prize. The Jezabels darkly serious and lush indie rock now continues on the journey to critical mass.

British India emerged from the underbelly of Melbourne’s independent music scene to take Australia by storm in with their acclaimed independent debut album ‘Guillotine’. With support from triple J radio their songs ‘Black & White Radio’ & ‘Tie Up My Hands’ became arm-raising, air-punching anthems at venues and festivals across the country. British India developed a reputation for their explosive live shows and extensive touring.

Over the past three years, Festival organiser Simon Leigh says “Wildwood has never strayed from its roots while at the same time continues to grow year after year. We just aim to bring together a warm feel good festival and have really gone beyond and above this year with our amazing line up and our food stalls and children’s area will once again bring colour, glitter and our own brand of fun to the festival.

“We are excited to see the forest filled with fireflies and adults and children alike sparkling from head to toe in their illuminated aurora. It’s always the most magical way to end a day of great music”.

Tickets for the event can be found at www.livetix.com.au and are $95 with kids under 12 free (with an adult ticket holder). The venue is fully licensed. 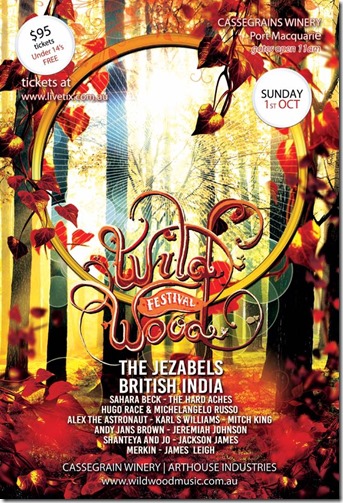