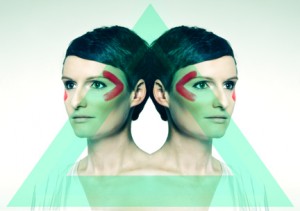 With a healthy saturation of first single ‘Be Gone’, Brisbane singer and musician Tara Simmons has unveiled the full details for her second full-length album It’s Not Like We’re Trying to Move Mountains, scheduled to drop Friday September 28 2012.

It’s been a long-winded 12 months for Simmons, who buried herself in the studio with producer Yanto Browning (Kate Miller-Heidke, the medics, The Jungle Giants, Art of Sleeping) to make something a little different to the sample-driven folk-pop she had cut her teeth making. She pulled aesthetic influence largely from the Scandinavian pop of the likes of El Perro Del Mar, Lykke Li and Robyn, threw in some direction from purveyors of the wonky-synth like Metronomy and Chairlift and emerged with arguably her best and definitely most ambitious effort yet.

Banging first single ‘Be Gone’ was offered strong summer support from triple j and a second single ‘Where Do You Go’ quickly appeared, reaffirming Simmons’ new direction into the thematically-brooding, synth pop you hear on … Mountains. The latest single to be lifted from the album is ‘Weekend of Hearts’ and is the stuff pop dreams are made of – ethereal beds of synths and throbbing bass leads into Simmons’ strongest chorus yet. Co-written with Hungry Kids of Hungary songsmith Dean McGrath, the song was the last to be recorded for the album after almost being abandoned.

It’s Not Like We’re Trying To Move Mountains is Simmons’ pop opus, one that derived from a realisation that her own entertainment while on stage was vital – so far, it’s certainly paying off.

TARA SIMMONS | IT’S NOT LIKE WE’RE TRYING TO MOVE MOUNTAINS
NEW ALBUM OUT SEPT 28 VIA INERTIA
FEATURING SINGLES ‘BE GONE’, ‘WHERE DO YOU GO’ AND ‘WEEKEND OF HEARTS’