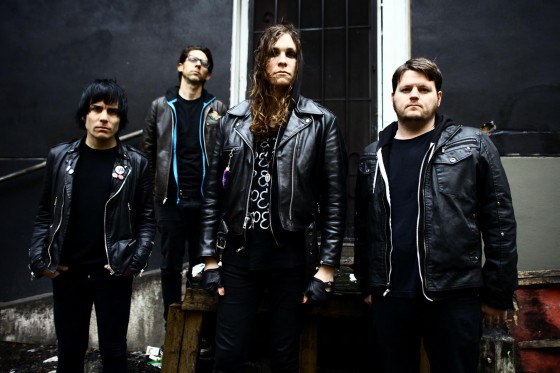 To pirate the title of one of their early songs (and still a set-list staple), Against Me! is a band that laughs at danger and breaks all the rules.

Fronted by Laura Jane Grace, AM!’s latest offering, Transgender Dysphoria Blues, was released in January 2014. The title of their sixth album offers a direct nod to news that shocked fans and shook up the rock world when it was dropped—Grace is a transitioning transgender person.

Formerly known as Tom Gabel, she revealed her story in the May 12, 2012 issue of Rolling Stone (readers curious to learn more about the transition can check out Laura Jane’s “My First Year as a Woman” journal online in Cosmopolitan).

Because Transgender Dysphoria Blues marks the band’s first release with Grace as a woman, there are a lot of misconceptions: The record is neither a radical stylistic departure nor a “concept album.” Rather, it’s just another bold step forward for an artist doing what she has always done—forging her own path by processing the highs and lows of life through music.

Against Me! began as an anarchist solo act in Gainesville, Florida in 1997. After transforming into a traditional four-piece a few years later with the crucial addition of guitarist James Bowman, they quickly became a driving force in the punk scene—despite facing an abundance of unsolicited danger.

Joining Grace and Bowman in the band are a brand-new rhythm section. Longtime bass player Andrew Seward amicably departed Against Me! in 2013 after 11 years with the band. Since that time, Inge Johannson (formerly of Sweden’s International Noise Conspiracy, and a surefire winner of the “Scandinavian Ramones Lookalike Contest,” if one is ever held) has come aboard as the full-time bassist.

The new drummer is punk stalwart Atom Willard, who launched his career as a teenager with Rocket From the Crypt and has had stints with the Offspring, Angels & Airwaves, and Social Distortion. Willard replaced Jay Weinberg, who’d toured with the band since late 2010.

With the lineup changes, Grace acknowledges that Against Me! may be in a state of flux, but the mission is still real: “If I didn’t feel like I had something that I really needed to say with the album we’ve been working on for the past year then I’d humbly hang the hat and move on”.

Touring with Against Me! will be California’s Joyce Manor, this being their second tour of Australia and the first since the release of “Never Hungover Again”.